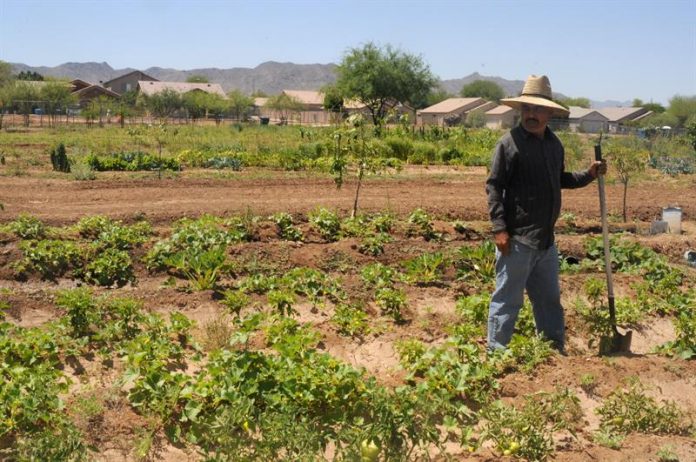 Tired of not having stores that sell healthy foods and being surrounded by “junk” food stores, a group of neighbors from a suburb south of Phoenix, Arizona, decided to transform an almost desert area into a community farm.

“Spaces of Opportunity” is a land of 19 acres (7.7 hectares) where families and volunteers began to grow their own food, primarily for self-consumption, although over time some participants became entrepreneurs, as the Iraqi Hussein Al Hamka who became the owner of land, in his case an acre and a half (6 hectares).

He currently sells his products to select restaurants in Arizona.

“I plant melon, watermelon, tomatoes (variety of Mexican tomato), eggplant, pepper, potatoes, pumpkins and different kinds of cucumber, and since I have a very large family they help me distribute them in markets and restaurants, which generates good income” , said Al Hamka, who arrived in the United States in 2009 as a refugee and worked full-time in agriculture four years ago.

They are currently working on a sustainable project where farmers themselves already have a large organic food market, a “farmer market”, as it is known in English.

Nicolás De la Fuente, director of “Spaces of Opportunity”, extended to Efe that this project comes to rescue the old agricultural history of the area and give a new opportunity for growth.

Southern Phoenix, he said, has the highest rates of unemployment, crime and chronic diseases.

“With this project we offer the opportunity to not only be workers earning the minimum wage, but to be their own businessmen, earn a good salary and be more than pickers picking vegetables,” said De la Fuente.

A study by the Department of Agriculture reveals that 23.5 million low-income people in the country live more than a mile (1.7 km) from a supermarket, and also points out that the postal codes of the poorest areas have a 30 % more than self-service stores.

Isabel García, leader of Unlimited Potential and promoter of the farmers, explained that this type of phenomena happen in the poorest urban areas and are known as “deserts food” (food deserts), where supermarkets are very far from the neighborhoods and the supermarket stores abound, mostly with “junk” food.

“South of Phoenix does not have access to a supermarket within a mile radius, this project seeks to eliminate this need, the goal is to create a healthy food system that is comprehensive and sustainable, where land and plants are treated with respect” , detailed Garcia.

He added that they intend to develop a local economy driven by families from the community, mostly immigrants and refugees of different nationalities.

“60% of the population of southern Phoenix is ​​Latino or immigrant, they are cooperating to be more productive, we want to be a model of how this type of work can be done in other parts of the country, using vacant land,” promotion girl.

On the other hand, the initiative has designated 10 acres (4 hectares) to an “incubator” farm where people can enroll in a learning program and then become individual farmers.

Through this system, farmers develop and maintain their plot of land, learn the procedures for harvesting and preparing for the market, and have access to commercial and crop planning.

The additional 9 acres (3.65 hectares) are used by the community. Some families can rent a piece of land for a small fee.

Stephanie Hunter, who has been working on these properties for 3 years and does not mind staying under the strong sun in order to take her planting out, occupies a small community space for personal sowing.

“I have a quarter of an acre that is rented for $ 5, where I plant pumpkins, cucumbers, cauliflower, tomatoes, onions, lettuce and sunflowers, I like what I do and it makes me feel good,” Hunter said. efe