The world of silence of the Olympic medalist Pilar Roldán

In the women’s foil final of the 1968 Mexico Olympics the city seemed to fall apart, but the Mexican Pilar Roldán was imprisoned in a world of silence and thanks to that she survived and won a silver medal.

Roldan had lost to Soviet Elena Novikova and Hungarian Ildiko Ujlary, but he recovered and defeated the Soviet Galina Gorokhova and the French Brigitte Gapais. Then came the fight for the medal, against the Swedish Kerstin Palme, and it was when the audience of the Hall of Arms, seat of the fair, and the rest of the city were protagonists of a paroxysm almost seismic.

“I went ahead and she caught up with me, they say that people were upset, but I felt isolated and I did not hear anything.” I made a tap and so I secured the medal, which I later learned was silver behind Novikova, because I had a better difference of blows that the Hungarian “, tells Efe almost 50 years later.

Pilar is the daughter of Ángel Roldán, member of the Mexican team of the Davis Cup of Tennis in 1934, and María Tapia, tennis champion of the Central American and Caribbean Games, but did not inherit the genes of her parents. His ‘drive’ was not the best, he did not dominate the backhand stroke and, although he tried, he soon gave up trying to follow the family’s path with a racket in his hands.

Before entering High School he read “The Three Musketeers” by Alexandre Dumas and saw the film, which marked the before and after his life. Obsessed with imitating D’Artagnan, one day she was seen in the fencing class of the Italian maestro Eduardo Alajmo and there she began her growth as an athlete. 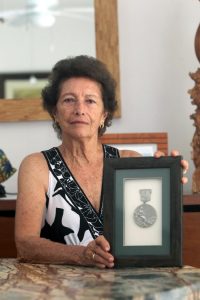 “It was not difficult to decide for fencing because it was good and not in tennis, so every time I dedicated myself more to foil and I started to improve,” he recalls.

Months before she turned 15, she received a greater gift, being part of the Mexican delegation to the Pan American Games based in her country in 1955, in which her parents were veteran members of the tennis team.

Pilar did not win a medal, but became known on the world circuit. He debuted in Olympic Games in Helsinki’56, where he was tenth, and was in Rome’60 as the flag bearer of the delegation. They did not take it to Tokyo in 1964 because the president of the Mexican Olympic Committee said it had no quality, words that should have been swallowed later.

Months before the IOC had announced Mexico as the venue for the Games of the XIX Olympiad and Pilar concentrated on excelling herself, which made her defeat the best in the world in various competitions in the United States and Europe and in 1967 conquer the Gold medal at the Pan American Games in Winnipeg (Canada).

At her home in the Mexican resort of Cancun, Pilar pauses, measures the words and assures that what is different from the Olympic Games in Mexico was that people got involved, which made outside athletes feel at home .

“Once I entered the final, I just had to give my best, we were all couples and I’m sure that if they had repeated the competition the result would have been different,” he says.

He speaks with the authority of someone who has lived more than 78 years and clarifies that, unlike what many believe, the fencing training was not boring and reveals that the really hard part was finding time to compete after fulfilling his main occupation, the of mother of two children.

“When I left the fencing I dedicated myself to the family, I had another daughter and at the age of 15 I returned and won the 1983 World Cup for veterans in Toronto, but in the sword,” he recalls.

Now that Mexico celebrates the half-century of the 1968 Games throughout the year, Pilar sometimes observes her medal and feels the happiness reserved for the women who were great what they dreamed of being girls, in her case a female version of D ‘Artagnan.

They tell him that for the celebrations for half a century of the Games will travel to Mexico the champion Elena Novikova, who repeated his gold medal in Munich 1972 and won another team in Montreal 1976, and has a hard time imagining what it will be like to see that young girl 21 years old turned into a 71 year old grandmother.

“I do not know what we would talk about, I guess fencing, after the Games I saw her again when I used to throw a sword as a veteran and we just greeted each other,” she says, and sinks back into her world of silence, which she attended a long time ago. time when he had to get the most out of himself before the best in the world.

Putin insists on having a conversation with Biden on Monday if it is not possible this Friday Erdogan calls US president's comments "unacceptable". The Russian authorities...

The organization of the Premios Juventud announced on Wednesday that the Colombian singer Maluma will receive on July 18 the award for "Agents of...

The United States is experiencing another "cyber Monday", the date on which online stores take advantage of the latest spate of consumerist fever around...

Santos Laguna of Uruguayan coach Dante Siboldi took a two-goal tie at the Águilas del América home today and qualified for the final of...

New York, .- The general prosecutors of more than 40 states have sued before the Justice 20 pharmacists, accused of inflating prices and curb...