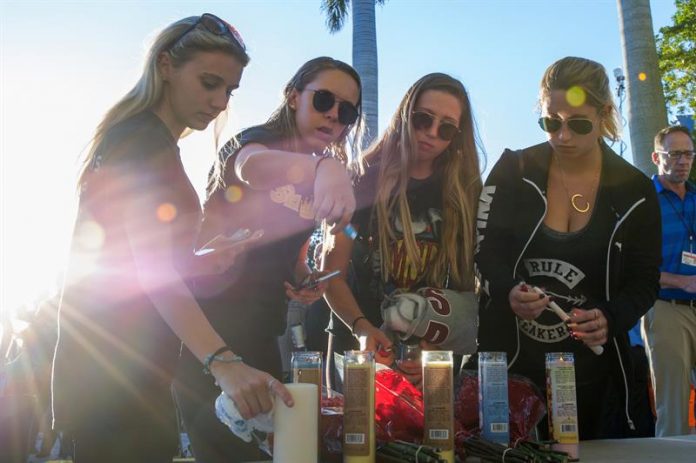 Four seniors from the Parkland school in South Florida, killed during the slaughter on February 14, were honored at the traditional promotion party, local media reported today.

Meadow Pollack, Nicholas Dworet, Joaquin Oliver and Carmen Schentrup, four of the 17 fatalities in the massacre perpetrated by Nikolas Cruz, were remembered at the party held at the Westin Fort Lauderdale Beach Resort hotel, decorated for the occasion as an enchanted forest, as recorded by the Sun Sentinel newspaper.

The hallway leading to the room where the party was held on Saturday night, which received 850 students from this school, hosted a giant sculpture of ice, while from the ceiling flew butterflies in a night that was staffed by the Office of the Sheriff of Broward County guarding the compound.

After the incident, for which the author confessed is in custody and faces 17 charges that may bring him the death penalty, Marjory Stoneman Douglas School weighed to cancel the traditional promotion party, but different companies, including the hotel, decided to donate or offer the cost of their services and articles, which allowed to reduce the price of the entrance.

Last year’s student Rebecca Schneid, dressed in a black dress, said that no one in her class will forget the four victims who had graduated this year from being alive.

For her part, as the Miami Herald reports, Carley Ogozaly, a close friend of Meadow Pollack, wore a pink tulle dress with her back open in honor of the murdered teenager, in addition to a pearl pink manicure.

They were also part of the event, which provided a room for those who would like to reflect, the survivors Emma Gonzalez, Alex Wind, Jaclyn Corin, Cameron Kasky and David Hogg, who became the most visible faces of the movement for greater control in the sale of weapons.