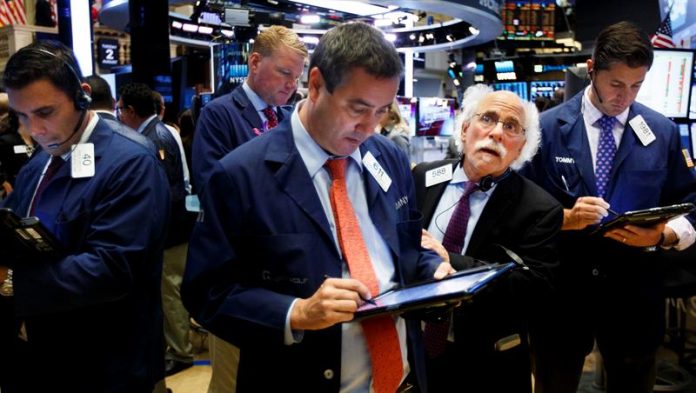 Wall Street closed today with losses and a decline of 0.82% in the Industrial Dow Jones, in a session marked by a fall in the titles of Apple and with a rise in the yield of the benchmark Treasury bond to 2014 levels .

The session raised concerns about the evolution of Apple, the company with the largest market capitalization in the United States, following reports that anticipate a decline in sales in the coming months.

The financial firm Morgan Stanley reported that sales levels of iPhone phones will disappoint the market in June, and similar comments were also issued by Merrill Lynch and JPMorgan.

Those reports had an impact on the value of Apple’s shares, which lost 4.10% at the close, with the logical repercussions in a sector, the technology, in which the iPhone manufacturer has a key weight.

The news was known in the middle of a new day of quarterly results, although those that General Electric released before the opening of the market, although good, lost importance in front of the strong decline of Apple.

General Electric gave some data on benefits that were above expectations. Wall Street, which has been punishing this group for some time due to the transformation process it is suffering, rewarded it today with an advance of 3.93%.

The mood of the operators was also influenced by the improvement in the performance of the ten-year Treasury bond, which at the close of Wall Street was at 2.958%, in a trend that, if it persists, will subtract money from the stock market because it represents more risks .

Of the thirty titles included in the Dow Jones, the progress of General Electric was followed by that of the sports firm Nike (+0.55%) and that of the pharmaceutical Merck (+0.32%).

Outside of the Dow Jones, another technological giant, Alphabet, lost 1.11%, affected by the sector’s setbacks and in the previous session to disclose its results for the first quarter of the year.

In other markets, Texas oil closed with a slight advance of 0.13%, despite comments by President Donald Trump complaining about what he believes is a high price in the price of a barrel of crude oil.

In addition, at the close of Wall Street, gold fell to 1,338.0 dollars per ounce and the dollar gained ground against the euro, which changed to 1,2282 dollars. efe