More than 30 million families will be left without special...

The committee that investigates the assault on the Capitol summons...

The US Supreme Court overturns the Biden law that requires...

Cuba demands the closure of the Guantánamo detention center, which...

Dozens of Cuban exiles gathered today in the neighborhood of Little Havana, in Miami, to demand free and democratic elections on the island, and not the application of “a trap to pass from one dictator to another.”

Ramón Saúl Sánchez, president of the Movimiento Democracia, the organization in charge of convening the demonstration, told Efe that the election of who happens in the Presidency to Raúl Castro, on April 19, is a “betrayal of the people of Cuba, because” changing tyrants is not being free. ”

“In 60 years we Cubans have not been able to choose either the system of life or our leaders, we did not choose the so-called socialism that prevails in Cuba,” Sánchez said.

He regretted that four days after Raúl Castro leaves the Presidency, the Cuban people do not know who will be his successor and he was therefore a supporter of the campaign promoted by the Cuba Decide movement, led by Rosa María Payá, daughter of the late Cuban dissident Oswaldo Payá.

This movement, some of whose members were part of the rally, promotes a political change through peaceful mobilization and the celebration of a binding plebiscite in which Cubans are asked “what do they want: to continue or a change towards the democracy? “, as summarized by Sánchez.

The concentrates put a series of photographs of children who were part of the 37 fatalities in the sinking of the Cuban tug “March 13,” “crimes that remain unpunished,” as Sanchez said, and blame the Castro regime.

On one side of these photographs, the Cuban Pedro Pablo Guzmán Cabrera, of San Antonio de los Baños, criticized the “change by finger” that will take place in his country of origin and called for “free and democratic elections”.

“It is not about dynasties or succession,” said the man, dressed in rigorous white and who said that the island requires “radical changes.” 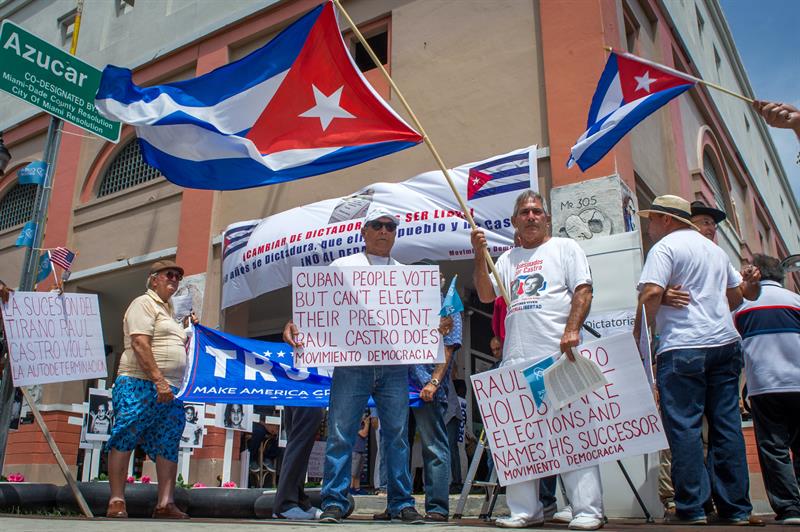 During the meeting, where the slogans “Viva Cuba libre” and “Down with communism” were not lacking, the exiles dedicated a moment of silence for “the martyrs and the political prisoners”, as well as for the dissidence on the island that to that At the same time, he had planned a rally in Havana and there was no certainty that it had taken place.

Sanchez congratulated the Peruvian government, which hosted the VIII Summit of the Americas, held in Lima and which Raúl Castro did not attend, for taking “a correct position by saying that in times of democracy there is no room for dictators.”

The president of the Democracy Movement, which in recent days sent a letter to the US president, Donald Trump, asking to consider a series of points for the “democratization” of the Caribbean island, thanked the solidarity that in the meeting in Lima showed the vice president of USA, Mike Pence, to the representatives of the exile and the Cuban opposition.

“Despite some siren songs that stun people, it seems that in general the American continent is reacting,” Sanchez said.

In a press conference offered this week, Sanchez said he has asked the US president to push a law, similar to that applied to Venezuela, that “directly punish Cuban officials who violate human rights.”

Among those gathered today in this enclave of the Cuban exile in Miami, there was a coincidence not only in rejecting the change of leadership on the island, but in the need to “keep hope alive.”

“There is no form or analysis that justifies what the Cuban regime has done,” Efe Eugenio Silva Perez, a native of Havana, emphasized.

Overweight and obesity are associated with diabetes in 90% of cases

Overweight and obesity are associated with type 2 diabetes in 90% of cases, so bringing good nutrition and exercise reduces the risk of having...

Accompanied by renowned designers, Antonio Banderas today launched the 2017 edition of Miami Fashion Week (MIAFW), during which will be presented a fusion of...

Republicans charge against their party’s legislator for racist comment

Two of the most influential Republican senators, Mitch McConnell and Mitt Romney, today charged against their party's legislator, Steve King, for making a comment...