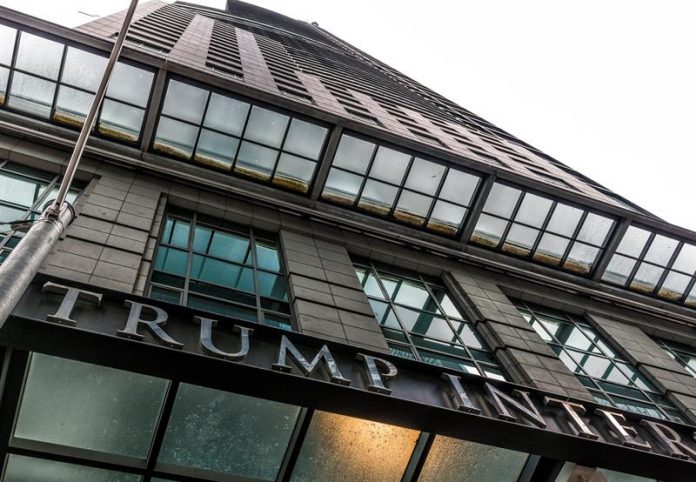 A “Donald Trump” sitting behind the bars of a small cell, wearing red cap and tie and golden handcuffs is the protagonist of a protest staged by a collective of artists in a room of the luxury hotel chain Trump in New York, reported today local media.

Seven members of the Indecline group, which gained notoriety after installing during the campaign of 2016 life-size and totally naked statues of the now US president, rented a room last Thursday at the “Trump International Hotel and Tower” in Manhattan.

The New York Post reported that the artists, in an operation that resembled the “Trojan Horse”, transported in their suitcases the materials they used for the staging that they have begun to disseminate through their website thisisindecline. com.

The artists dismantled the decoration of one of the spaces in the suite and, using paper strips, simulated a cement wall and then assembled a cell of 5 feet (1.5 meters) by 8 feet (2.4 meters), details the daily and as seen in a video broadcast by the group, wearing masks and balaclavas.

In the cell, in which McDonald’s packages and a copy of the book “The art of the deal” of the American ruler surrounded by rats were seen lying on the floor, sat a person disguised as “Trump” and who had at his side A photograph of Russian President Vladimir Putin.

Also on the spot hung several US flags with designs that included holes, signs of having been burned or colored, and in which appeared the faces of figures such as the philosopher Noam Chomsky, the late boxer Muhammad Ali, the journalist Hunter Thompson, among others.

The exhibition of the flags was aimed at “celebrating the history of activism and protest of the United States,” one of the group’s members told the New York newspaper.

According to the version, the team of artists worked throughout the night of Thursday for the staging, without unexpected visits of cleaning or other interruptions.

Once the editing was over, he invited a press group for a few hours on Friday night and then worked to leave the room as he found it.

“The fun part is that when they see what happened, they will come quickly and find a totally normal room,” one of the participants finished.

The scene hopes to repeat it in April in a gallery in Pasadena (California) and also sell the flags and allocate the proceeds to nonprofit organizations, according to The New York Post.