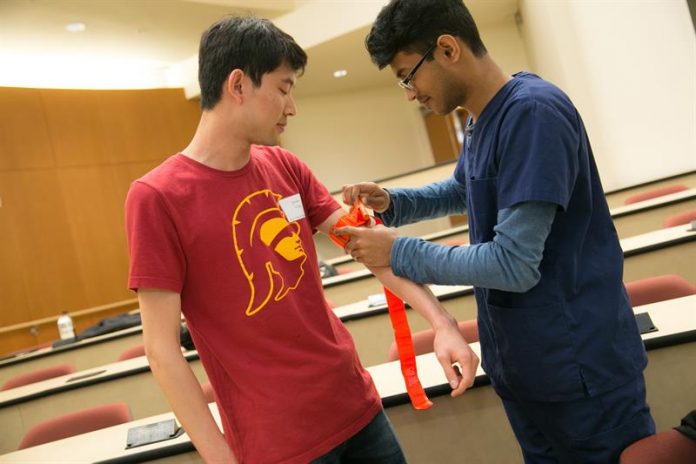 The recent shootings in the United States led the surgeons of the country to establish the campaign “Stop the bleeding”, whose central day is celebrated today, and in which workshops teach how to stop bleeding in cases of emergency.

According to the College of Surgeons of the USA, about 20 of every 100 patients with hemorrhages die because no one knew how to “stop the blood” while the professional help arrived, and that is why they urge the population to train for this purpose.

“The first cause of death is hemorrhage, that if we had done something to stop the bleeding, many would not have died,” Kenji Inaba, director of the general surgery program at the William Keck School of Medicine at the University of the South, told Efe. of California (USC) in Los Angeles.

“The best time to intervene and stop bleeding is at the time and place where they occur, by people who are there, without medical personnel within reach,” added the director of the aforementioned medical school, who joined the campaign on Friday. with a training day.

The “Stop the Bleed” initiative arose after the slaughter at the Sandy Hook School in Newtown, Connecticut, in December 2012 and that “the techniques to stop bleeding are of knowledge from all over the world, “as Inaba explains.

According to the website of the campaign, in which videos and tutorials are available, in the four years of the campaign so far in the United States, 124,350 people have been trained to stop bloodshed by 15,332 specialists.

Vanessa Olvera, a USC medical student who received the training, told Efe that the techniques to stop bleeding are easy to learn and also necessary “because when accidents occur there are never any doctors around.”

“In case of people bleeding, the first thing: call the emergency number or the Police for help from medical personnel and ambulances,” Olvera, of Mexican roots, advised.

“Then, protect the patient if he is on a road or if more debris could fall, and then detect in which part of the body is the bleeding to apply the pressure techniques to stop the blood, while the professional help arrives,” he added. .

Meanwhile, the student Maryan Masood told Efe that “in addition to learning the technique to stop bleeding, we must promote the domino effect by sharing what we have learned with family and friends, because in emergencies we could save lives”.

“There are people who faint when they see blood, but it is because they are not prepared and the instruction helps us to mentalize ourselves to think about helping someone in emergency,” he said.

According to statistics of the initiative, 20% of “foreseeable deaths” due to “traumatic injuries” are due to “bleeding”.