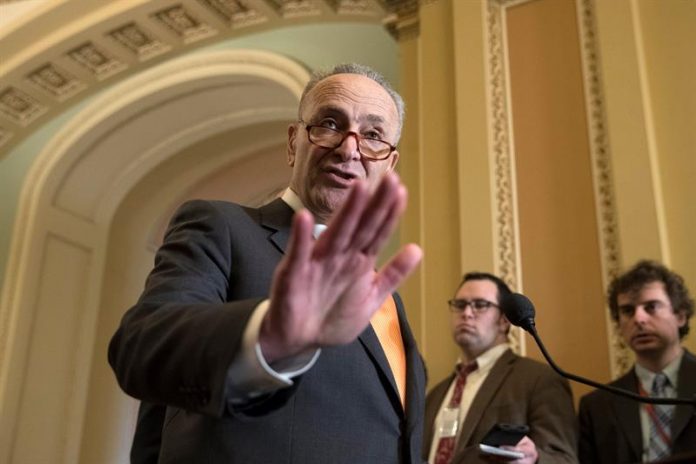 The two main parties in the US reached today a budget agreement of 1.3 trillion dollars that includes a big increase for the Pentagon and a game for the wall with Mexico less than what the president wanted, Donald Trump.
The agreement awards funds until next September although it is part of a two-year global budget agreement that the two parties signed in February.

Now, Congress must approve it before midnight on Friday to Saturday so that the government does not run out of funds and incur what would be its third partial administrative closure since January.

The agreement reached today includes a game of something less than 1,600 million dollars for the border wall, far from the 25,000 in the long term that Trump intended.

Despite the pretensions of the Democrats, the agreement makes no mention of the “dreamers” or “dreamers”, those undocumented youth who came to the country as children and are now at risk of deportation because of Trump’s immigration policies.

The Democrats conditioned their support to the budgets for the regularization of these young people, but finally gave in to the negotiation.

The White House announced its support for the accounts this afternoon, although US media claim that Trump has not been satisfied with the departure for the construction of the wall.

The leader of the Senate Democrats, Chuck Schumer, said he was satisfied with the agreement despite the concessions.

“Every bill requires a compromise, and in this bill there were many, but at the end of the day, we Democrats feel very good because many of our priorities for the middle class were included,” he said in a statement.

For his part, the Speaker of the House of Representatives, Republican Paul Ryan, also expressed satisfaction with the agreement reached: “This project fulfills our promise to rebuild the Armed Forces of the United States.”

The two legislative chambers are expected to approve the agreement on Friday, although the vote in the lower house could be advanced to tomorrow, Thursday.

What is still unclear is whether Republican Senator Rand Paul, who opposes the increased spending on the accounts, will repeat the delaying maneuver that in February caused a partial administrative closure due to lack of funds for a few hours.