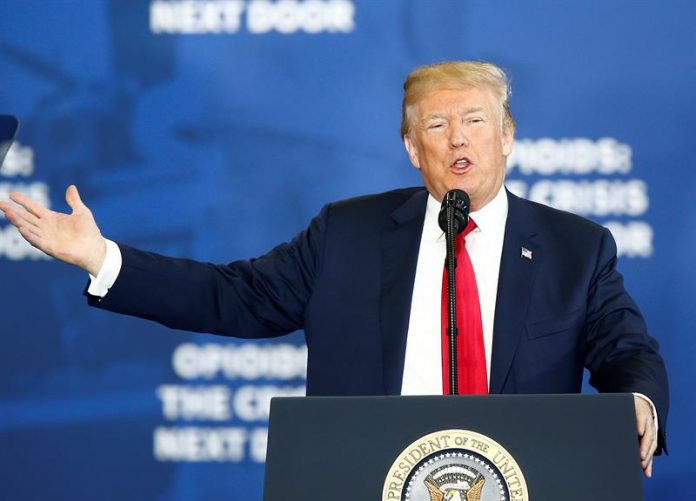 The president, Donald Trump, announced today that he will ask for the death penalty for “really bad” drug traffickers and will try to toughen the sentences for that crime, in an attempt to fight the epidemic of opiate addiction that every day leaves 175 dead due to overdose in the country.

Trump, who throughout his term has praised leaders such as Philippine President Rodrigo Duterte, for his strong hand against drugs, presented a plan to tackle the opioid crisis that will lead the Justice Department to seek the death penalty. for drug traffickers when the current law allows it.

“We’re wasting our time if we do not get tough on drug dealers, and that harshness includes the death penalty,” Trump said in a speech in New Hampshire, the third state in the country hardest hit by opiate addiction after West Virginia. and Ohio.

“Some of these drug traffickers will kill thousands of people during their lives (through the drugs they move), and if they get caught, they will fall 30 days or a year in jail, or they will be fined, and (instead), if you kill a person (murdering her), you get the death penalty or life imprisonment, “denounced the president.

Trump said it is “possible” that the US “is not ready” to impose the death penalty on all those who traffic in drugs, as other nations do that “do not play with games” and have “not had a problem with drugs “because they execute drug traffickers.

“But I think that unless you do that, unless you have really powerful sentences, led by the death penalty for really bad drug traffickers and those who abuse the most, we’re not going to get anywhere,” Trump said.

“We will not rest until the end, this scourge of drug addiction in the United States will stop, it will stop,” he promised.

Justice Secretary Jeff Sessions confirmed in a statement that his department “will use federal law to seek the death penalty (for drug traffickers) when appropriate.”

US law allows the death penalty to be applied only in cases of murders related to drug trafficking or drugs, according to the independent organization Death Penalty Information Center.

The Trump administration had also considered imposing capital punishment on those who would traffic even small amounts of fentanyl, a dangerous synthetic opioid.
But his speech and the information provided by the White House suggest that he has finally decided to limit himself to requesting the death penalty in all those cases in which it is already legal.

The focus of the White House is especially on those who traffic in opiates, which can be obtained by prescription or on the black market, and also with fentanyl, an analgesic that is usually used to treat cancer but has been used in recent years for criminal groups to increase the power of heroin.
“I’ve told China not to send (fentanyl), and I’ve told Mexico not to send it,” Trump said.

In addition, the White House has asked Congress to approve a law that “reduces the minimum amount of drugs necessary to invoke mandatory minimum sentences for drug traffickers who knowingly distribute certain illicit opiates that are lethal in small doses,” according to a statement. release.

Drug crimes in the US they are currently judged in accordance with a minimum sentencing law of 1986, which establishes penalties of up to 20 years in prison for small drug dealers, and reserves life imprisonment for particularly serious cases.

The White House plan also aims to reduce opioid analgesic prescriptions made by doctors in the country by a third over a period of three years, in addition to supporting the development of a vaccine to “prevent opioid addiction” and pain management options “that are not addictive”.

Trump also reiterated that his Department of Justice is “seriously examining” the possibility of “opening large litigation against pharmaceutical companies” interested in prescribing opiates.

According to data from the Centers for Disease Control and Prevention (CDC), 64,000 people died in 2016 from an overdose of opiates (including heroin) in the United States, equivalent to 175 fatalities a day and seven every hour. efe