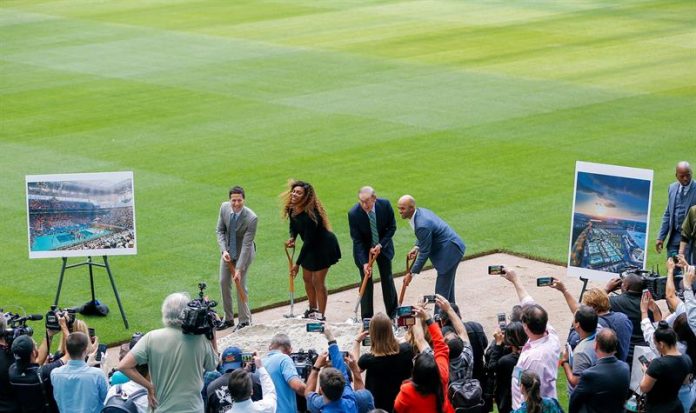 The Miami Tennis Open officially began today the transition of the tournament from its historic location, in Cayo Vizcaíno, to the Hard Rock Stadium, where from 2019 they are convinced to “create new memories” that leave aside the nostalgia of more than three decades in Crandon Park.

With triple the surface available, Stephen Ross, owner of the Miami Dolphins and the stadium, the tennis player Serena Williams, the tournament director, James Blake, and Mark Shapiro, president of the IMG company, owner of the tournament, inaugurated the works today. of future installations.

There will be an increase of 7,000 seats, more than 32,000 in total, as well as 9 more courts, for a total of 30, and facilities for players, such as changing rooms or gyms, will double capacity.

“I do not know if it will be more special here, in Cayo Vizcaíno we had wonderful moments, iconic instants, over 30 years, but here we will create new memories, we will have incredible moments in this stadium,” said Serena Williams, eight times winner of the Open of Miami and investor since 2009 of the Dolphins, the football team of the city.

Its owner, Stephen Ross, whose investment “made it possible for the Open to stay in Miami,” said that Williams may be the first person to win a tournament “of which he owns”, in reference to the player, who considers this stadium as his house”.

In an act in the same Hard Rock, Serena confessed that when Ross told him the idea of ​​hosting the tournament in his stadium he thought he was “crazy”.

“Stephen is a visionary, but I told him we could not do it, it broke my heart when I knew we were going to lose the tournament in Miami, I thought it was impossible,” said the player raised in South Florida, who now celebrates “that listen “to the tycoon.

Ross, who signed an agreement with IMG for 30 years and an investment of 16 million dollars, said he wants to “create something unique in the sport” and give people “a new experience.”

Thus, the current edition of the tournament, which begins on Tuesday, will be the last to be held in Cayo Vizcaíno, to go to do it inside a football stadium and in its vicinity, a fact that the 23 times winner of a Grand Slam called a “unique experience in sports”.

Shapiro confessed that they did not want to leave Cayo Vizcaíno and said that they “did everything possible to stay in Miami”, where the tournament leaves an economic impact of 386 million dollars every year.

To solve the problems of space in the facilities of Crandon Park, the county of Miami-Dade and the tournament reached an agreement on December 20 to move to the Dolphins Stadium, after years of controversy and the dispute for a millionaire debt to the Floridian region.

For his part, former player James Blake, new director of the tournament, said they want to make “the best tennis tournament in the world,” although he acknowledged that “it will be a bit nostalgic.”

“Like all changes, there will always be people who miss things, it’s a special atmosphere in Cayo Vizcaíno,” admitted Blake.

He highlighted memories such as the victory of Marcelo Ríos against André Agassi in 1998, which served the Chilean to be the first Latin American to head the world ranking, or the first final among the Williams sisters, in 1999.

Two decades later, the tournament director hopes to create “their own traditions and history,” in a stadium where “he hopes to see Serena win many more times.” efe