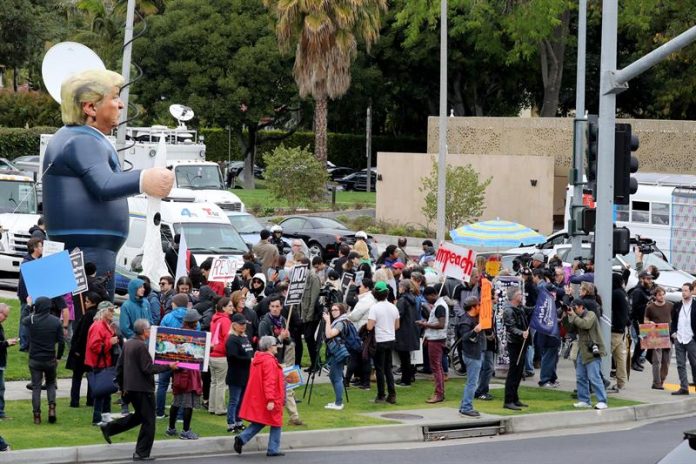 The rain did not stop hundreds of protesters from meeting in Beverly Hills, California today, to reject President Donald Trump’s immigration policies amid the president’s first visit to Los Angeles, where he is seeking to raise funds for his re-election.

The day of protests in Los Angeles began at four in the afternoon at Beverly Gardens Park, one block from the famous Rodeo Drive.

Hotel workers, trade unionists, defenders of the rights of the undocumented and young “dreamers” joined to shout in unison that “California does not obey Trump.”

“If you criticize California so much, if you do not want immigrants, then do not come here that we do not want it,” Cristina Hernández, a hotel worker who joined the event, told Efe.

After visiting today eight prototypes of the wall on the border of San Diego with Mexico, the president landed in the afternoon at the Los Angeles International Airport, where no local official came to welcome him.

The president was at the home of Ed Glazer, owner of the Tampa Bay Buccaneers professional football team, in the exclusive neighborhood of Beverly Park. Public access to the site was blocked by officers from the Los Angeles Police Department.

Maria Elena Durazo, of the Los Angeles County Federation of Labor (AFLCIO), stressed that although the president wants to try to avoid criticism and turn a deaf ear to the protests, he will finally have to recognize that the country’s value is made by the people worker.

“He became a millionaire because of the work of many Hispanics who work in their hotels, of the immigrants from the countryside who send food to his table, we will not give in to our struggle, he will have to understand it,” Durazo stressed.

Ron Gochez, director of Union del Barrio, one of the organizations that called the event, highlighted the presence of Anglo-Saxons and other minorities who joined the voices of protest of Hispanics.

“This is the reflection of the community and the call is for all, so that we can unite and fight against this government, which can not stop here,” insisted Gochez.

The protest was peaceful and, although some supporters of the president wanted to confront the protesters, the confrontation only occurred verbally.
The cheapest entry to the fundraising event cost $ 35,000. The ABC television reported that some of the donors would have contributed up to a quarter of a million dollars.

Trump will spend the night in downtown Los Angeles at the InterContinental Hotel. The president is expected to leave for Washington this morning. 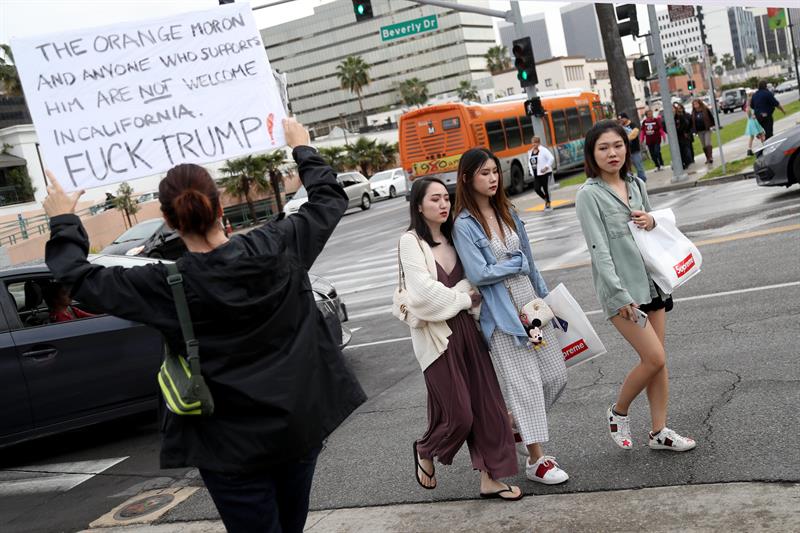 The Californian authorities closed ranks before the critics and attacks sent today by the president, Donald Trump, who visited for the first time since he came to power this state that has criticized with harsh measures.

California and the federal government have clashed on all political fronts, from immigration to health care through climate change, so Trump took advantage of his passage through San Diego, where he inspected the prototypes of the border wall with Mexico, to attack the measures and the leaders of the “golden state”.

“California’s ‘sanctuary’ policies are endangering the entire nation,” Trump said in reference to measures taken by cities or counties to not collaborate with federal immigration authorities.

“They are the criminal’s best friend, that’s exactly what’s happening, criminals are taking refuge in these ‘sanctuary’ cities,” said Trump, who also said that the governor of California, Jerry Brown, is making “an terrible work “at the head of the” golden state “.

Brown responded to Trump through a Twitter message referring to “facts” about his state: “Bridges are better than walls, and California remains the sixth largest economy in the world and the most prosperous state in the United States.”

The general prosecutor of California, the Latin Xavier Becerra, who has led several lawsuits in recent months against federal policies was also pronounced.
“Here in California we respect the Constitution and we comply with the law, as I have said on many occasions, our state laws work in concert with the federal laws,” he said on Twitter.