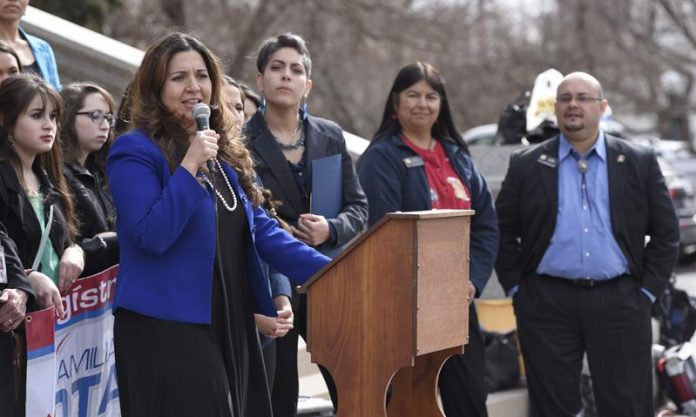 Some 200 Hispanic leaders met today at the Capitol of Colorado with local congressmen to show their rejection of proposals that seek to criminalize aid to undocumented immigrants and their support for environmental justice initiatives.

“Today we work together to bring about change, I am frustrated by the issues that impact our community and remain unresolved,” said Crisanta Durán, president of the local House of Representatives, opening the session of Latino Day in the Colorado Legislature.

Duran, a Democrat, recalled that in her teens she marched with the strawberry pickers in Bakersville, California, in favor of the rights of these workers. Currently, he said, marches continue, as in the case of women’s rights and environmental protection.

The talks between Latino leaders and state legislators focused mainly on two bills, one that seeks to criminalize all management to protect undocumented immigrants and another that seeks to restrict and limit the actions of oil and natural gas companies as a way to protect environment.

Bill HB16-1178, by Republican Dave Williams, would make it a crime to create “sanctuary jurisdictions” as well as any other “relief action” for undocumented immigrants.

If the project were approved, the current Colorado Government Immunity Law, which protects public officials from legal action against them for doing their duty, would be modified, so these officials could be fined up to almost two million dollars for “help” undocumented.

In addition, Williams’ bill establishes that legal actions against officials in “sanctuary jurisdictions” could be initiated by anyone who feels “harmed” by the lack of cooperation of local authorities with federal immigration agents.

“They want to dehumanize immigrants, they do not see them as people, they just talk about ‘illegals.’ We must oppose that bill,” Durán said.

The other proposal, HB18-1157, promoted by Democratic Representative Jonathan Singer, seeks to expand the information that oil and natural gas extraction companies must submit to the government on incidents such as small spills, gas leaks or accidents with injuries.

According to the organizers of the Latino Day, laws such as HB18-1157 are necessary because a “disproportionate number” of Latinos live in areas near refineries, oil or natural gas extraction fields or areas in which companies engaged in these activities operate.

The mobilization of today, already in its twelfth year, also focused on issues such as the reproductive rights of Latinas and economic equity in Colorado.

According to a report released Sunday by the local organization for the study of demographic trends The Bell Policy Center, “systemic barriers” persist that prevent minority groups from accessing the financial opportunities generated by the good economy.

The same report maintains that “there is no equitable investment” in the different communities of Colorado and that “this disparity will deepen” if no action is taken.

In terms of reproductive justice, Dusti Gurule, interim executive director of COLOR (an organization that defends the rights of Latinas), expressed the need to “commit to show solidarity with all communities of color.”

“It is vitally important that we continue to show our resistance to the world by remaining together,” Gurule told Efe.

For Democratic Representative Dan Pabón, demonstrations like today at the Capitol in Denver show that this year there is an “opportunity to push Colorado forward with bold and progressive ideas.”

“We do not want our families to just get ahead, we want them to make progress, and that means investing in the future, from preschool and free kindergarten in all communities to renewable energy throughout the state,” Pabón said.

“And we have to make sure that the economy benefits everyone, not just those with good connections or special interests,” he said.
According to the Census Bureau, 21.1% of the 5.6 million residents of Colorado are of Hispanic origin, that is, 1.18 million people. (efeusa)