J Balvin: Those who say they are detractors of reggaeton are going to come out of the closet

The successful Colombian singer and composer J Balvin today defended his musical genre against detractors who dismiss him as macho, and assured that people who say they do not like reguetón “will come out of the closet sooner or later.”

The singer was in the Mexican capital today, where he announced that he will offer a concert next May 26 in which he will perform his most emblematic songs as “Mi gente”, as well as his most recent works, “Machika” and “Ahora”.

At a press conference, J Balvin said he is “musically ready” to perform at the Arena in Mexico City, the location where his concert will take place, which he defined as “a much larger place with greater capacity” than the Auditorium National, where he had acted to date.

He explained that, after experimenting with different genres, in his latest works he has returned to “the roots of pure reggaeton”, a genre that in his opinion has a high “historical value”.

According to the Colombian, the reggaeton “began in the neighborhoods of Puerto Rico and Panama, where people who had no choice but violence, music has saved their lives and allowed them to vindicate themselves before society.” 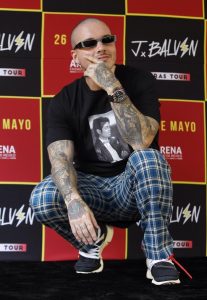 When questioned about the “macho” lyrics of many songs of the genre, he maintained that “it is clear that women consume the most reggaeton” and that “they are happy listening and dancing”.

However, she maintained that “we need more women in this genre,” and praised the “spectacular” music of Karol G, a well-known Colombian singer of trap and reggaeton.

Before the question of another journalist about the critics of reggaeton who say that he does not like this genre, J Balvin answered: “Those will sooner or later come out of the closet”, suggesting that they do like reggaeton even if they do not recognize it.

“It is enough with the dramas of the planet to be aware of the negative comments,” said the artist, who said he was always “positive.”

The singer offered the press conference with a shirt by Michael Jackson, whom he defined as “a person who was highly criticized and finally accepted by the entire planet and marked history.”

He also made a plea to “erase the Latin word”, since “we are all human beings of the planet”, and he ruled that “talent has no race, gender or color”.

“I do not make music for Latinos anymore, I’m Latino by nature, I want my music to be heard by the human race,” J Balvin said in an interview with Efe last summer in Miami.

José Álvaro Osorio Balvin (Medellín, 1985) released his first album in 2007 and, since then, has achieved several hits such as the song “Mi Gente”, whose video reached 15 million hits the same day it was published in Youtube. efe

The former president of the United States, Bill Clinton, warned today in Puerto Rico that the island must be prepared to spend the next...

Remittances from emigrants from the United States to Latin America and the Caribbean in 2016 amounted to almost 70 billion dollars, with an increasing...

One in five families that emigrate from Central America flees violence

Violence and threats increasingly push family emigration from the northern part of Central America. Almost 20 percent of the families interviewed in a UN...

Mexico is the sixth most visited country with 39.3 million tourists in 2017

The Secretary of Tourism, Enrique de la Madrid, confirmed today that Mexico became the sixth most visited country in the world, with 39.3 million...

Washington, 1 .- More than 15,000 people have signed a document demanding the president of the United States, Donald Trump, to fire his adviser...