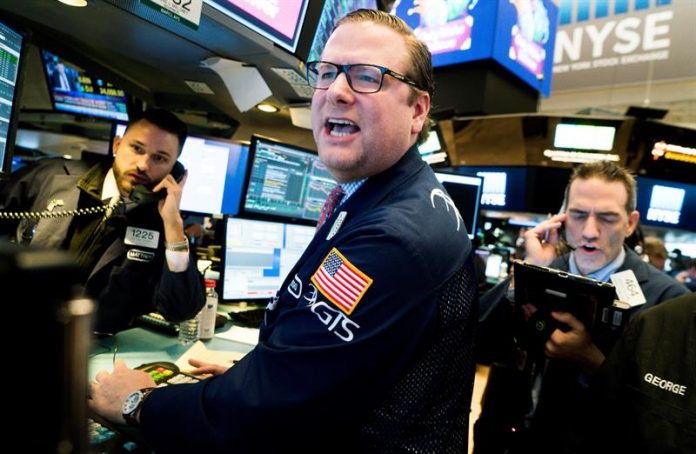 Wall Street closed today with strong gains and the Industrial Dow Jones advanced 1.39% as a broach to a volatile week in which worried the yields of public debt and the Federal Reserve had pending investors.

The Nasdaq Composite Index, in which the main technology companies are listed, broke its four-day losing streak and soared 1.77% or 127.31 whole, to 7,337.39 points, driven by large firms such as Facebook, Amazon, Netflix and Alphabet.

Although Wall Street has been in green territory all the session, purchase operations accelerated especially in the last hour and the three indicators ended with weekly advances for the second time in a row.

The New York parquet celebrated the end of a volatile week, marked by the minutes of the last meeting of the US Federal Reserve (Fed). and by a rise in the yield of Treasury bonds to levels not seen in four years, but which today fell in the papers to ten years.

Although the Fed saw an advance in interest rate rises this year, it said in its semiannual report on monetary policy that it sees the United States. near full employment, with moderate wage increases and inflation fluctuating around its target of 2% by 2018.

Virtually all sectors today had gains of over 1%, but that of public utilities stood out above them, with 2.10%. The others of energy (1.87%) and technology (1.83%) progressed with difference.

On the other side of the table, General Electric finished flat and United Technologies’ shares closed with a 0.32% retracement.