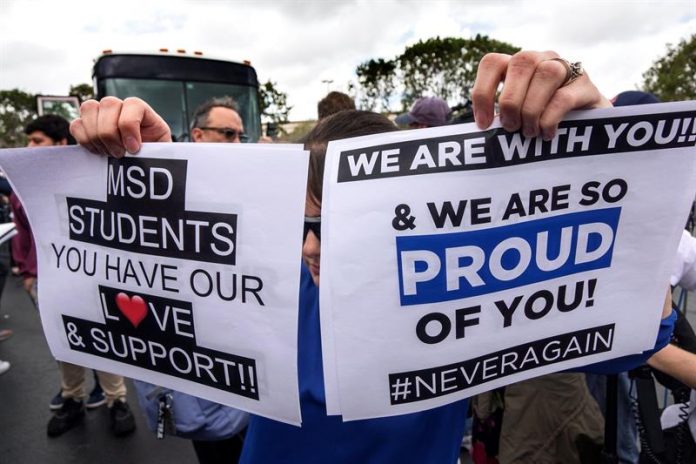 The lower house of the Florida Congress today ignored petitions in favor of restricting the sale of firearms that emerged after the massacre at a state high school, by refusing to debate a bill to ban semi-automatic weapons.

In the chamber were some survivors of the massacre perpetrated by a 19-year-old boy with an assault rifle at Marjory Stoneman Douglas High School in the city of Parkland (South Florida) on February 14, who could not hide his disappointment and pain because of the result of the vote.

A hundred students and teachers from that school traveled today from Coral Springs, neighboring city Parkland, to Tallahassee, the capital of the state, to pressure the congressmen to act in order to prevent firearms mourn more schools in the country .

Seventeen people, 14 students and three teachers, lost their lives on Valentine’s Day at Marjory Stoneman Douglas because of the indiscriminate shooting of former student Nikolas Cruz, who was arrested that same day and is in prison accused of 17 premeditated murders.

Sheryl Acquaroli, 16 years old and a student of that school, who attended the vote today, told CNN that the next death caused by gunshots of an AR-15 rifle, as used by Cruz, will fall on the conscience of the 71 legislators that today they voted not to that the proposal to prohibit the arms of assault contained in the project HB 129 followed its parliamentary proceeding.

The Parkland massacre has unleashed a youth movement in favor of limiting access to weapons that has taken the name of Never Again and that has called a large rally for March 24 in Washington.

In June 2016, 49 people were shot dead in a gay nightclub in Orlando by an American of Afghan origin, Omar Mateen, who said he was acting on behalf of the Islamic State before he was shot by police.

In January 2017, Esteban Santiago, an ex-military man of Puerto Rican origin with psychiatric problems, shot people waiting for luggage at the Fort Lauderadale airport with a gun he carried in a travel bag that he had just picked up and killed five.

He was arrested without resistance and awaits trial in prison.