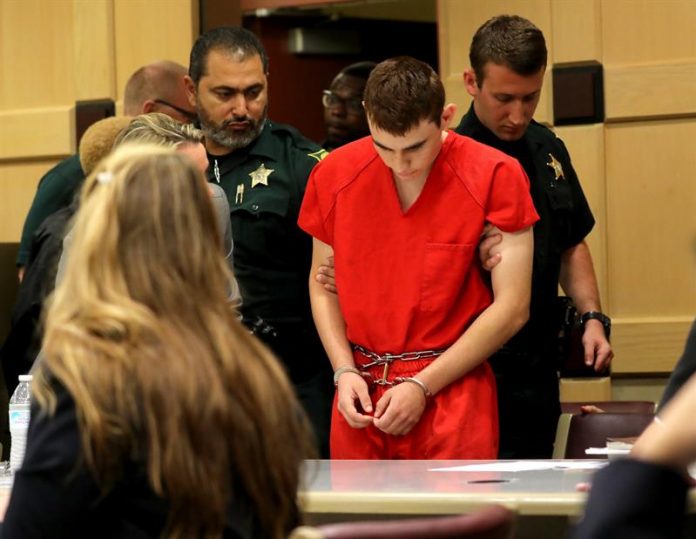 The Florida Department of Children and Families (DCF) will publish a paper on Nikolas Cruz, a self-confessed author of the 17-person massacre at a Parkland school, in which he notes that the young man suffered from depression, autism and attention deficit disorder. hyperactivity (ADHD, in English).

In an open case in September 2016, the DCF called Cruz a “vulnerable” person with several mental problems, which led doctors to prescribe one or more medications for those disorders, according to the report, reported today. “The Miami Herald ”

DCF lawyer John Jackson today asked the court to publish the report on this case of Cruz, 19, although he did not disclose whether the department he represents has other reports about the young man, but that he is the only one since he served. adulthood.

These types of reports are confidential, but both Jackson and the judge who approved his publication, Charles Greene, agreed that, with his actions, Cruz lost practically all his right to privacy, while the defense of the young man did not oppose This possibility.

This report would serve as a basis for the defense’s position that the authorities ignored Cruz’s systematic “requests for help,” defense attorney Gordon Weeks said.

After confessing the crime, the remaining question during the judicial process is whether Cruz will be sentenced to capital punishment or life imprisonment, and the state of his mental health will be fundamental in this decision.

During interrogations after the massacre, Cruz told police he heard voices in his head that told him how to perpetrate the attack, voices that were described as “demons,” ABC News reported.

After DCF opened this case, the author confessed to the shooting in high school Marjory Stoneman Douglas lost his adoptive mother, so he was again orphaned, after the death years before his adoptive father.

The young man appeared today before another judge, Elizabeth Scherer, in a hearing in which it was defined that it was about the secret of a motion presented last Friday by the defense without the content of it being known.

The young man, who remained without looking up from the table and barely moving, was accompanied by his two legal representatives, who advanced their intention to ask for secrecy for future motions.

The Snead couple, who welcomed the author of the shooting last week in Parkland (Florida), Nikolas Cruz, after the death of his adoptive mother, said today that they saw the young man after the killing and that he told them that he “felt” .

In an interview with ABC’s “Good Morning America,” James and Kimberly Snead explained that they crossed paths with Cruz at a police station on the same day as the shooting that killed 17 people at Marjory Stoneman High School. Douglas.

Kimberly indicated that when she saw him she began to shout at the young man and that what he “really wanted more than anything was to strangle him”.

It was then that Cruz, who had moved into his home after his adoptive mother died of pneumonia in November 2017 and the adoptive father died years ago, told them he “felt” it.

James explained that they still live a “rollercoaster of emotions” and that it is “hard” what they are going through, because they opened the doors of their house and now, through the Police and the media, they are knowing things about Cruz that they did not imagine then, because the young person seemed “normal” and was “very polite”.

Cruz was a friend of his son, and that’s why they accepted him to move with them, and that he feels “betrayed” and “furious” by what the shooting author did, because he was at that moment in school, and They do not plan to see him again.

James, ex-military, said that one of the conditions imposed on Cruz to move into the house was to buy a safe to store his weapons and that he thought he had the only key, so the young man could not use them without his permission. .

In this sense, he indicated that since he moved last November he only asked him to have the weapons twice, once to clean one of them, to which he agreed, and on another occasion he rejected the idea.