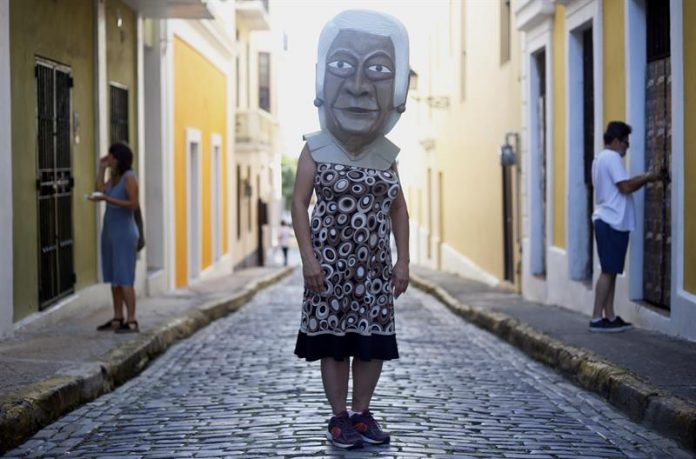 The traditional Fiestas of San Sebastian Street, celebrated in Old San Juan and dedicated this year to the artist of Puerto Rican origin Lin-Manuel Miranda, started today with a wide range of cultural and musical performances, a date and reference at international level.

Directed by the mayor of the capital, Carmen Yulín Cruz Soto, who accompanied by the chimes of the tambourines of a group of pleneros (musicians dedicated to the autochthonous genre of the plena), and big heads, started the comparsa from the entrance of the mentioned street to start traditional parties.

Some of the cabezudos made by the group Agua, Sol and Sereno and who participated in the procession were Rafaela Balladares and Ricardo Alegría, two of the promoters of the event, the salsa singers Ismael Rivera and Andy Montañez, the award-winning Caribbean composer “Tite” Curet Alonso and the independentista Oscar López Rivera.

And, for this year’s edition, Agua, Sol y Sereno premiered the heads of the founders of the environmental organization Casa Pueblo, Alexis Massol and Tinti Deyá, and whose body announced this week that the antenna of its radio station is the first in Puerto Rico and the Caribbean that is powered by solar energy.

Agua, Sol y Sereno also includes zancudos to bring life and joy to the thousands of people attending the cultural event, which this year is dedicated to Miranda, winner of the Tony, Emmy, Grammy and Pulitzer prizes and author of the musical “In the heights” and “Hamilton”.

Miranda, who did not attend the event, has not only stood out in the tables, but also in the cinema, when he composed two songs for the movie “Star Wars Episode VII: The Force Awakens” and has helped in the reconstruction of Puerto Rico after the passage of Hurricane Maria sending supplies.

Likewise, the actor of Puerto Rican origin composed the song “Almost Like Praying”, in honor of the Caribbean island, which he visited several times last year, not only to bring supplies, but also to announce that in January 2019 he will present ” Hamilton. ”

Along with Rafaela Balladares, the anthropologist and historian Ricardo Alegría, the painters Tony Maldonado and Rafael Tufiño and the folklorist Nidia Ríos de Colón, all already deceased, and the cultural promoter Aníbal Rodríguez Vera, together with the neighbors of the street, started this event .

The festivities also began with Father Madrazo, parish priest of the Church of San José, who took out some bigheaded people who personified the Kings of Spain and some dwarves belonging to Spanish folklore, more than four decades ago.

The cultural event, on the other hand, is loaded with a bad feeling among Puerto Ricans, who recover from the devastation caused by Hurricane Maria last September, leaving the island completely dark due to the fall of electricity and a large part of it. without drinking water.

Old San Juan, meanwhile, was also hit by the cyclone, as it was without electricity for more than two months, which caused dozens of businesses to cease operations, leaving people unemployed.

However, the historic place is replenished little by little with the arrival of tourists and weekly cruise ships, including 35,000 visitors from today until next Sunday, which adds a livelier and more economic spirit to the capital city. (efeusa)