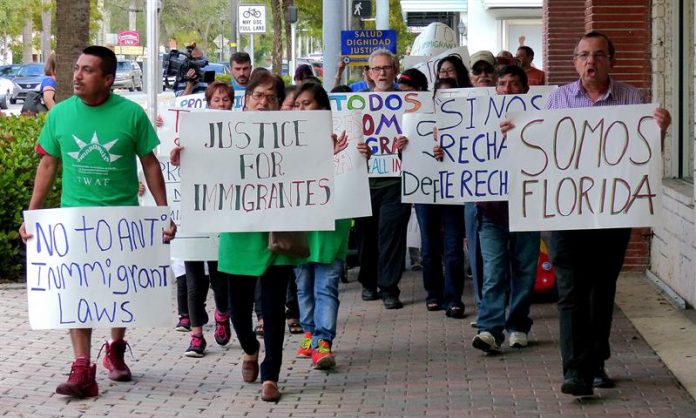 The lower house of Florida, with a Republican majority, today approved a bill that prohibits “sanctuary” cities, those jurisdictions that refuse to cooperate with federal immigration agencies, although it is expected that the rule will not be discussed in the Senate. .

In a session whose debate was dominated by the comments of President Donald Trump, who, according to the Washington Post on Thursday, called “holes of shit” to countries like El Salvador and Haiti, the norm went ahead with 71 votes in favor. , all Republicans, and 35 against the Democrats.

The text, promoted by Republican Larry Metz, stipulates the rejection of state funds to cities that do not comply with the requirements of federal immigration agencies, as well as fines of up to $ 5,000 for municipal councils that approve “sanctuary” measures for undocumented immigrants. .

Similar proposals to the one of today already have been approved up to three times in the last years in the state House of Representatives, nevertheless soon in the Senate not even they have gotten to be discussed in a committee, as it indicates the newspaper Orlando Sentinel.

Despite this, for the president of the state House of Representatives, the Republican Richard Corcoran and who would be considering running for governor, was a priority on today’s agenda the discussion of this measure, considered by the Democratic caucus as unconstitutional and racist .

“It will create fear in our community,” said Democrat Al Jacquet, who offered part of his parliament in Creole, Haitian language and in clear rejection of Trump’s qualifications to the Caribbean country.

The regulation also merited opposition from the Florida branch of the American Civil Liberties Union (ACLU), which noted that the rule is “unconstitutional” and “undermines the ability of the authorities” to protect the communities that it serves.

“By forcing the local police to become de facto immigration agents, this bill will prevent immigrant victims and witnesses from cooperating with the police for fear of being deported,” Kara Gross, legislative adviser to the organization, said in a statement.