The absence of the base Stephen Curry, low again with problems in the right ankle, weighed in the set game of the Golden State Warriors who fell defeated in their field against Los Angeles Clippers (106-125).

Reserve guard Lou Williams got 50 points, his best mark as a pro, and led the Clippers attack.

The victory allowed the Clippers to break a losing streak of three consecutive years against the Warriors, the current league champions, who came into the game with five straight wins.

The Warriors had forward Kevin Durant as their leading scorer with 40 points, which made him the 44th player in NBA history to reach 20,000 points.

Durant, 29, is the second youngest player, behind forward LeBron James, beating Kobe Bryant in second place, and the first of the Warriors, to reach the mark of 20,000 points.

In addition he is the fifth player in the history of the NBA in obtaining the mark of the 20,000 points before turning 30 years.

Slovenian base Goran Dragic approached the double-double with 20 goals and nine assists that helped the Miami Heat beat the Indiana Pacers 106-114 and consolidate their lead in the Southeast Division with the sixth straight win. , best current winning streak in the NBA with the Boston Celtics. 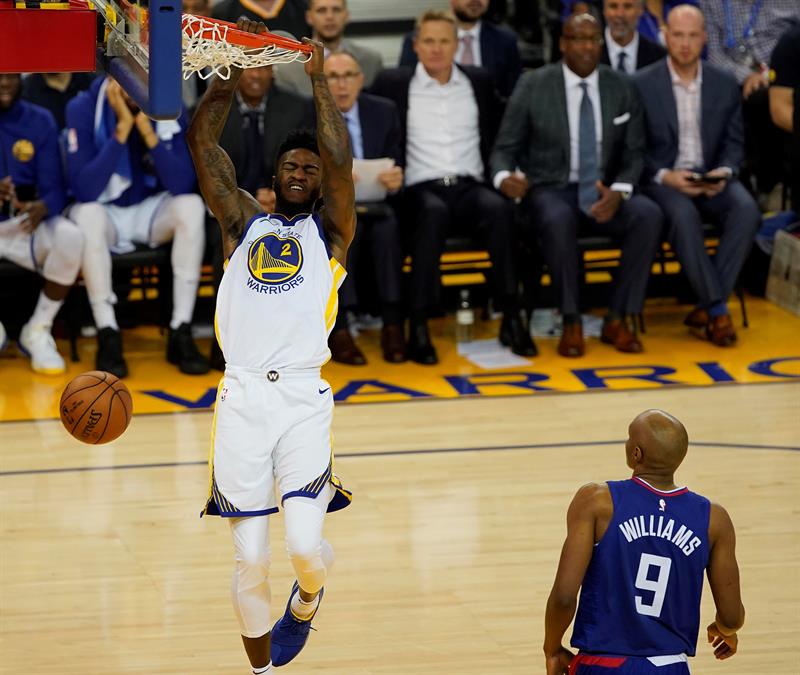 The Timberwolves won their third straight game at home and the tenth in their last 13 in the global competition, which consolidates them as leaders of the Northwest Division with a record of 27-16.

Base inspiration Chris Paul, who set his season’s best record, and guard Eric Gordon was the key that allowed the Houston Rockets to beat the Portland Trail Blazers 121-112 and win the second consecutive victory.

Paul contributed a double-double of 37 points, 11 assists, seven rebounds, and three turnovers that left him as leader of the Rockets (29-11), who are still leaders of the Southwest Division and with the second best mark of the season. Western Conference.

Gordon also shined with 30 points by scoring 11 of 23 field goals, including five 3-pointers from 12 attempts, in addition to capturing five rebounds.

Since the start of the season, Gordon, who has left the starting line-up in substitution of star guard James Harden, comes down with an injury to his left thigh, has scored 20 or more points in 21 games for 19 that he won in the entire competition of the past.

Spanish base Ricky Rubio got 21 points and was the leader of the attack of the Utah Jazz, who won at home by 104-107 to the Washington Wizards, who fell to second place in the Southeast Division.

Center Andre Drummond got a double-double of 22 points and 20 rebounds in the Detroit Pistons’ home win (80-114) against the Brooklyn Nets, who have accumulated three straight defeats.

The guard-forward Tyreke Evans scored 28 points, including two free throws with 5.9 seconds left of regulation time and Spanish center Marc Gasol added a double-double (21 points and 10 rebounds) in the Memphis Grizzlies (105-) 102) against the New Orleans Pelicans, who had the loss of power forward Anthony Davis, injured in the right ankle.

German point guard Dennis Schroder scored a double-double of 19 points and 10 assists and forward Taurean Prince scored 16 for the Atlanta Hawks, who prevailed in their visit to the Denver Nuggets (97-110), ending a run of 10 games lost consecutively away from home.

Finn rookie Finn Lauri Markkanen contributed a double-double of 33 points and 10 rebounds in the triumph of the Chicago Bulls that were imposed in double extension 119-122 to the New York Knicks, in duel of losing teams of the Eastern Conference.

Forward Harrison Barnes scored a double-double of 25 points and 11 rebounds that allowed the Dallas Mavericks to score their second straight win by defeating the Charlotte Hornets 111-115, who had Kemba Walker as the starting point scorer. it reached 41 points.

PepsiCo backed down and clarified that it will not manufacture Doritos for women, a week after its CEO, Indra Nooyi, left open the door...

Hollywood and showbiz stars donated funds in the last hours to those affected by tropical storm Harvey, which has left more than 20 dead,...

“Avengers: Endgame” and “Game of Thrones” triumph at the MTV Movie & TV Awards

Los Angeles (USA), .- "Avengers: Endgame" as best film and "Game of Thrones" as the best series were the big winners of the MTV...

The IMF leaves unchanged, at 1.9%, the estimated growth in Latin America

The International Monetary Fund (IMF) maintains its growth forecasts for Latin America in 2018 at 1.9% and has increased two tenths of 2019, to...

Expoter Alex Rodriguez stated that having used steroids during his 23-year career in the majors cost him millions of dollars as well as the...