The Golden State Warriors once again claimed their status as current league champions and best NBA team with point guard Stephen Curry and shooting guard Klay Thompson, who imposed their inspiration in the duel against the Houston Rockets. they won at home by 114-124.

Curry with 29 points, including four triples, nine rebounds and five assists, was in charge of leading the attack of the Warriors, who broke the score in their favor in the fourth period and achieved the third consecutive victory.

The star base of the Warriors played his 600th game with the Golden State team and became the tenth player in franchise history to get it.

Thompson reached 28 points after scoring 6 of 10 triple attempts and became the second highest scorer of the Warriors (31-8), which consolidate the best record of the Western Conference and the league.

While power forward Draymond Green also shone as the most complete player of the Warriors to get a triple double-double of 17 points, 14 rebounds and 10 assists.

Despite the decline of star forward Kevin Durant, with muscle problems, the Warriors showed the great squad they own and got the ninth consecutive victory outside their field as well as establishing the best mark as a visiting team having already 16 wins in what it’s seasonal

The Rockets, who also had the loss of his star escort James Harden, could hold the pace of the Warriors encestador and even reach the nine goal advantage, but in the final stretch his defense was not the best and could not stop the machine encestadora of the current league champions.

The escort Eric Gordon with 30 points, including 17 in the first half, and surprise reserve Gerald Green, who scored 29 points, including eight triples – he beat his best mark as a professional – in the end they were not enough at the time avoid defeat.

The base Chris Paul also stood out with 28 points by scoring 5 of 10 triples, gave nine assists, captured seven rebounds and lost four balls, without the end could get the decisive goals.

The “Big Tree” encestadora inspiration was present in the attack of the Oklahoma City Thunder with the base Russell Westbrook, and the eaves Paul George and Carmelo Anthony that helped his team to win at home 117-127 to Los Angeles Clippers.

Westbrook, who returned to be a prophet in his native land, contributed his thirteenth triple-double of the season by getting 29 points, 12 rebounds – 10 defensive – and 11 assists that left him as the most complete player of the Thunder and of the match

While George scored 31 points and led the list of six players, including the five starters, who had double-digit numbers with the Thunder (22-17), who won the second consecutive game and consolidate the second position within the Northwest Division .

While Anthony managed 22 points, and the New Zealander center Steven Adams was on the verge of a double-double with 12 points, nine rebounds and put a stopper.

The victory allowed the Thunder to break the streak of four consecutive losses they had in the recent clashes against the Clippers at the Staples Center in Los Angeles.

The Oklahoma City team, who have won eight of the last 10 games, also left the Staples Center with consecutive victories against the local teams in Los Angeles after last night they also defeated by beating 96-133. Lakers, the team with the worst record in the Western Conference. 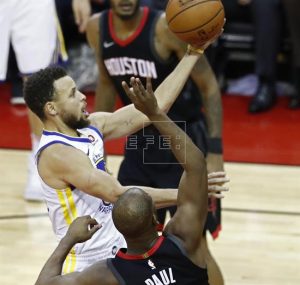 Spanish guard Álex Abrines missed the Thunder for the second consecutive game due to discomfort in the groin, but Oklahoma City team coach Billy Donovan said he did not think it was “serious”.

The pivot DeAndre Jordan was the great figure of the Clippers to get a double-double of 26 points – the best mark of the season – and 17 rebounds.

While guard Lou Williams, who came back out of reserve reached 26 points, and starting power forward Blake Griffin got 24 points, nine rebounds and seven assists.

The Clippers reached the fourth quarter with the partial advantage of 97-94, but the Thunder, who put their second team on the field with the reserves, achieved a surprising 12-0 run, which made the difference in the end. marker.

The Clippers, who broke a four-game winning streak, failed the first seven shots they made at the beginning of the fourth quarter and that was what also condemned them to defeat.

The rookie base, the Serbian Milos Teodosic, could only play the first part of the game with the Clippers, after he again felt discomfort in the left foot, affected by plantar fasciitis.

Billionaire Bill Gates will invest $ 80 million to build a "smart city" in Arizona that will have an area of ​​about 100 square...

The relatives and friends of former New England Patriots Aaron Hernandez were present at the final farewell he was offered at a funeral. Privately...

The Colombian reggaeton artist Maluma is the main attraction of the new Latin music festival "Lift Off" (Takeoff) that is celebrated today and tomorrow...

Women to “save the world”, from Oprah to Brie Larson, meet in N.York

New York, - Presenter Oprah Winfrey, astronaut Mae Jemison and actress Brie Larson have more in common than being stars in their fields: they...

The United States Government has announced a battery of sanctions against several senior Nicaraguan officials, among them the Defense Minister, Rosa Adelina Barahona Castro,...