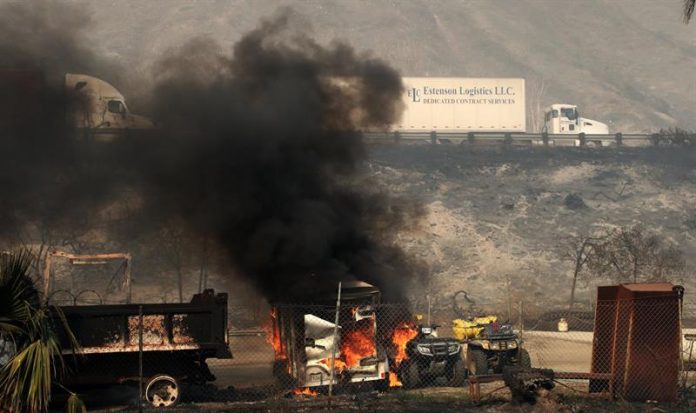 A devastating fire in southern California has left at least one dead, 500 buildings destroyed and thousands of people evacuated, in one of the worst emergencies in that state, local authorities reported today.

The medical center of Ventura County confirmed on Friday in a statement the death of a 70-year-old woman, originally from the town of Santa Paula and that, so far, “is the only death confirmed by fire in Ventura County” , one of the most affected by the fires that began last Monday.

According to the center, on Wednesday the woman was trying to escape from the fires and had an accident in the car in which she was traveling, which caused serious injuries and caused her to inhale a large amount of smoke.

The body was found on a road near the city of Santa Paula, in Ventura County, famous for its citrus crops and which, since Monday, has been threatened by strong winds that have fueled the fires and destroyed hundreds of homes. .

While the fire continues, the health authorities of the region have warned its inhabitants of poor air quality and the harmful effects of smoke, especially for children, the elderly and those with respiratory, circulatory or heart problems.

Los Angeles County, which includes the city of Angelina, has asked residents not to leave the house, while Santa Barbara County authorities have distributed 50,000 masks to residents to cover their mouths and noses.

Since Monday, the fires have razed 67,300 hectares, a larger surface area than the city of Chicago.

According to the latest data from the California Department of Forestry and Fire Protection, fires have destroyed 500 buildings, forced dozens of roads to close and led to the evacuation of 200,000 people, although many have already been able to return to their homes.

In the last hours, firefighters have been able to achieve important advances in fire control due to a decrease in the strength of the so-called “Santa Ana winds”, which this week blew with a force of up to 128 kilometers per hour and served to fan the flames.

However, firefighters are still trying to put out a fire named “Thomas” in Ventura County that could only be controlled by 10%, according to the authorities.

That fire has already destroyed 56,700 hectares and has caused large plumes of smoke, which makes it difficult for firefighters to work and prevents the aerial fight against flames.

US President Donald Trump declared a state of emergency for California on Friday, which allows federal assistance to help the state in the fight against fires.

The governor of California, Democrat Jerry Brown, is scheduled to meet today with some of the neighbors affected by the fires in Ventura County. (efeusa)