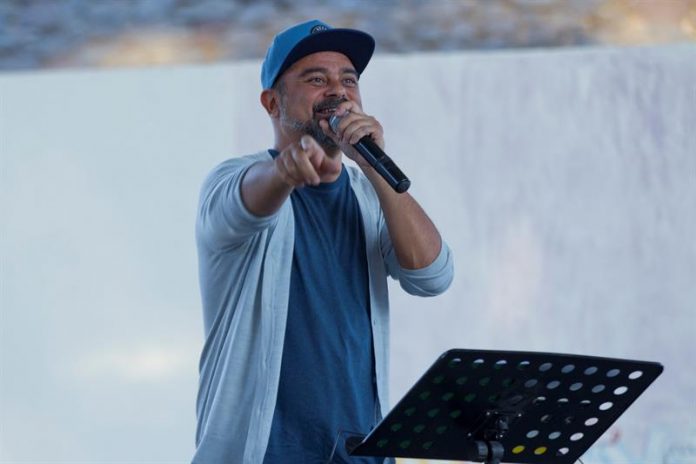 Spanish rapper Ignacio Fornés, known as “Nach”, today delivered his verses to young Mexicans during a poetry show included in the parallel activities of the Mexican International Book Fair (FIL) of Guadalajara.

The musician presented his poetry book “Hungry” in the plaza March 18, located in an old prison that was transformed into a garden and meeting point for the inhabitants of the nearby colonies in Guadalajara, western country.

Far from the formal protocol of the book presentations at the fair, which ends this Sunday, “Nach” (Alicante, 1974) made the simple concrete auditorium, ceiling of sheet and walls freshly painted white and dozens of fans of all ages that were carried away by their rhymes without background music.

“Hungry”, edited by Planeta, contains the poetry created over four years and that allowed him to get around his “own slopes” and “withstand the obstacles” that life is presenting, he explained.

With the sunset in the background, “Nach” recited the same poems from the book of verses in songs like “Brain wash” and “I shit in love”.

Without music and not a single beat in the background the Spanish rapper went from one side to another in that thin border that separates the lyrics of a melody with poetic verses.

The meeting took at times a pint of concert: “I love you Nach” and “You are an idol” was heard while the musician told anecdotes around the book.
“If that is the case when they come to a poetry reading, I do not want to see how they will do it in a concert,” said a pleased “Nach” to the audience that applauded him at the end of each poem.

Over the course of an hour, reflections on life, sadness, despair and the passing of years trapped skateboard girls, young parents with children in their arms, boys with extremely loose hats and pants, and curious on bicycles .

The rapper played with the rather young audience who questioned if they saw him older than in 2015, when he offered a concert in Guadalajara. “It will come to you” to feel in the middle of the board of life, he said with a smile.

The session closed with “I’ve been there”, a verse that the rapper read for the first time in public.

“Nach” took a collective selfie while the attendees chanted his name and then left in a hurry in his truck, pursued by his fans for a couple of blocks.

From November 25 to December 3 and with Madrid as the guest city of honor, FIL gathers more than 700 writers from 41 countries representing 20 languages ​​in hundreds of activities.