The Institute of Contemporary Art of Miami (ICA), a museum dedicated to providing “free and free access to innovative art,” opened today its new headquarters, a praised “monument to innovation” by the Spanish studio Aranguren & Gallegos.

“It was like putting a pike in Flanders,” said José González Gallegos and María José Aranguren López, head of the study, who attended the inauguration along with their two daughters, also architects, and other members of the firm.

Euphoric to see the work completed, the two architects, both professors of projects at the School of Architecture of Madrid and specialists in museums, said with that very Spanish expression that it is not easy for someone from outside the United States to have achieved a commission as East.

The mayor of Miami, Francis Suarez, his predecessor in office, Tomás Regalado, and the philanthropist Norman Braman, who donated the funds to build the building, cut the opening ribbon after an act led by the director of the ICA, Ellen Salpeter.

Craig Robins, donor of the land in the prestigious Design District of Miami where this museum is open to the public, also spoke at the opening, as well as other benefactors.

Two of the sides of the three-storey building, the east and the west, have no openings, but the north and south façades are “open” and expressive “, with motifs made with aluminum triangular structures the first and glazed the second.

The praises to the design of Aranguren & Gallegos were lavished during the ceremony, as well as the messages of thanks to all those who have made donations so that the ICA has its own headquarters, with donations that have reached almost 75 million dollars.

Created in 2014 with the mission of promoting “continuous experimentation” and the exchange of ideas in contemporary art, the ICA was, until now, housed temporarily in a building from the 1920s near its new headquarters. 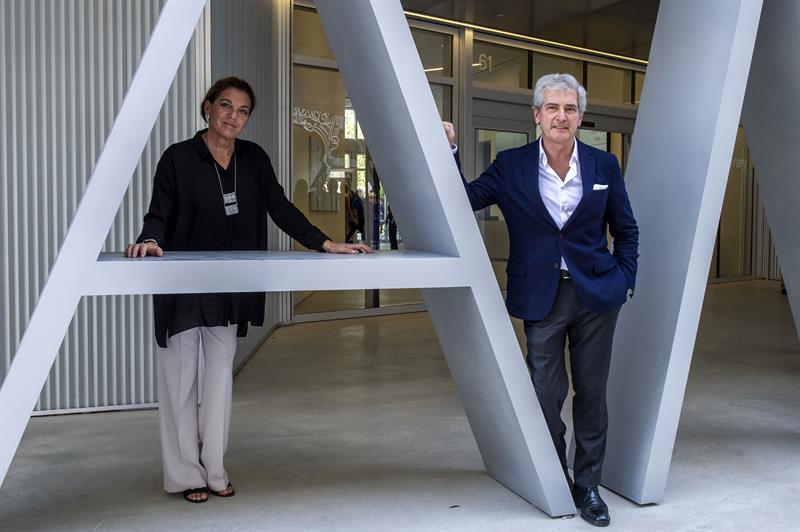 The inaugural exhibition, titled “The Everywhere Studio” and curated by Alex Gartenfeld and Gean Moreno, with the help of Stephanie Seidel, brings together over 100 paintings, sculptures, video and installations made by fifty artists over the past 50 years.

Its purpose is to chronologically explore how the space where an artist works has been changing from the postwar period to the present day and also the artist’s relationship with his studio.

Pablo Picasso, Roy Lichtenstein, Bruce Nauman, Carolee Schneemann, Jason Rhoades, Martin Kippenberger, Elaine Sturtevant, Anna Oppermann, Tetsumi Kudo and Andrea Zittel are some of the artists who sign the works of this exhibition that will be officially inaugurated on December 5, already during Art Week in Miami.

The epicenter of the week is the famous Art Basel fair, whose fifteenth edition will open on December 6 and open to the public the next day at the Miami Beach Convention Center, where there will be works by 4,000 artists and where it is expected that more than 70,000 visitors pass from December 7 to 10.

“Art Basel changed the profile of the city,” Manny Kadre, an ICA board member, told Efe today, adding that there is still a lot of room for new cultural institutions in Miami and stressed that existing ones are not “competing” between yes.

For the mayor of Miami, Francis Suárez, the ICA is something “precious” for the community, because it provides children and young people the possibility of accessing art and its transforming power of mind and spirit.

Miami is a “booming” city where “fantastic things” happen but there is also another Miami where people are “struggling” to get ahead and institutions like ICA are the link so they can join, he added.

“This project is very important for any Spanish study with the crisis that architects have gone through,” said Gallegos, seconded by Aranguren.

Both architects are authors of projects such as the ABC Museum in Madrid, the National Center for Visual Arts, the Archaeological Museum of Córdoba and the Museum of Fine Arts of Cáceres, all in Spain.

Chicago Federal Reserve Chairman Charles Evans was open today to no further US interest rate hikes. In the remainder of the year, after those...

Trump’s government will ask for authorization to deport unaccompanied minors

Washington, .- The Government of Donald Trump will ask the US Congress authorization to deport unaccompanied minors arriving from Central America as one of...

The US National Guard will keep 7,000 of its members in Washington until mid-March

The United States National Guard announced this Saturday that, at the request of the Government, it will keep approximately 7,000 of its members in...

San Antonio (Philippines), .- The United States today exhibited its military muscle with the Philippines on the coasts of the South China Sea, scene...

Trump says that Kim has committed to denuclearize North Korea

US President Donald Trump said today that North Korean leader Kim Jong-un has told his government that he wants to denuclearize North Korea while...