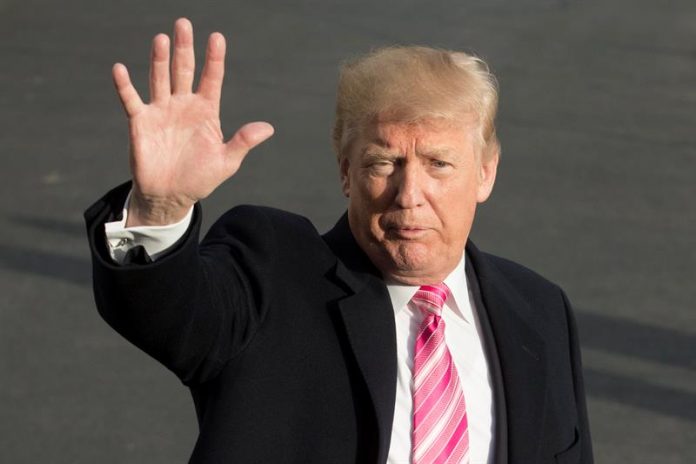 President Donald Trump culminates today in Florida a long weekend for the holiday of Thanksgiving, and that meant his return to the warm coasts of the southeast of the country since last April.

On his last day at Mar-a-Lago, in the city of Palm Beach, the president took the route this morning to the Trump International Golf Club for his fifth consecutive day dedicated to this sport and which has been one of the main activities since his arrival last Tuesday.

Shortly before, the president used his Twitter account to go again against the Democrat Doug Jones, who hopes for the Senate in a by-election on December 12, in a race against the Republican Roy Moore, accused of sexual harassment for eight. women.

“The last thing we need in Alabama and the US Senate is a puppet of Schumer / Pelosi that is WEAK in crime, WEAK on the border, bad for our Army and our great veterans, bad for our Second Amendment, AND WANTS TO RAISE TAXES HEAVEN, Jones would be a disaster! (Sic), “he wrote.

In this way, Trump again insisted via Twitter that any option is better than the presence of a “liberal” in the upper house, as he has said in recent days, and in an almost direct support to Moore.

So far it is unknown if this Sunday the president returned to play golf with figures of this sport, as it happened in the previous days during his stay in Southeast Florida.

According to US media reports, Trump played some holes against the legendary Jack Nicklaus on Saturday, who has accumulated 18 victories in the big circuits, and the son of the retired athlete, Gary.

During the 2016 election campaign, Nicklaus showed his support for Trump, with whom he had already played golf, and also owns a club, the Nicklaus’ Bear’s Club, which is close to the president in Jupiter, one of the three in southern Florida that are owned by the president, according to the Palm Beach Post newspaper.

Precisely, in the latter, at the Trump National Golf Club, the president had the opportunity to enjoy on Friday that is one of his favorite sports along with the number one in the world, Dustin Johnson, who this year has won four tournaments and in 2016 he He led the United States Open, as well as with Tiger Woods and Brad Faxon.

In a weekend without major incidents to highlight, the only unforeseen fact was the driver of a red van, who on Saturday afternoon tried to cross and hinder the passage of the delegation that was transporting the president back to Mar-a-Lago .

As reported by the pool of journalists accompanying Trump, after being forced by the local police to park on one side, the driver “made obscene gestures and shouted several expletives.”

The fact reminds the woman from Virginia that last month she showed her finger to the official motorcade in which Trump was traveling.

Shortly after the incident with the driver, the delegation found a group of opponents posted with posters on the boulevard that overlooks the Mar-a-Lago club and, a few meters away, another of supporters with flags and hats with the slogan campaign, “Make America great again”.

The US president traveled Tuesday with his wife Melania and his son Barrón to Mar-a-Lago, considered the “White House of winter”, on the occasion of the Thanksgiving holiday, which was held last Thursday.

The evening of that day, the president, family and friends enjoyed a traditional menu that included turkey, mashed potatoes and sweet potatoes, red snapper and Florida crab and a variety of cakes and pies.

The return to Washington is scheduled for this afternoon, at an unspecified time.