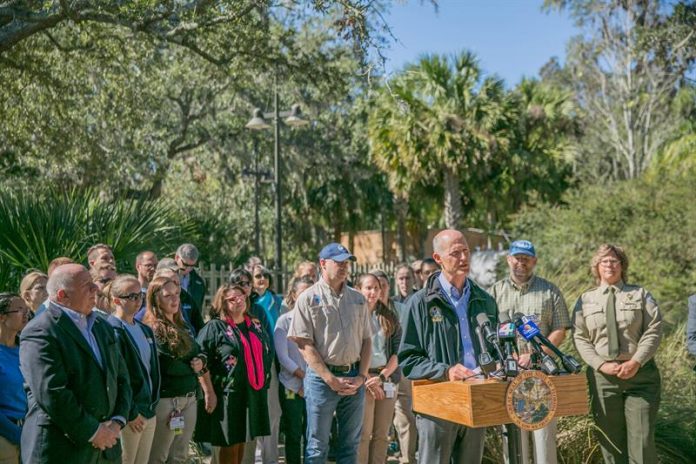 The governor of Florida, Rick Scott, announced today that in the draft budget for 2018-2019 to be presented to the state Congress will allocate a record of more than 1,700 million dollars to protect and preserve the environment, 200 million more than the year previous fiscal

As he said today at a public event in Jacksonville (north Florida), Florida’s natural treasures are “very important for the economy and the tourism industry of the state and for the many families that live on this.”

Within the budget project, the largest allocation in the environmental area -355 million-will be to restore the Everglades, the huge wetland rich in biodiversity located in the center of the state.

One of the key actions in the Everglades is to expedite the repairs and expansions of the Herbert Hoover dam in Lake Okeechobee, for which it proposes to dedicate 50 million dollars.

That old dike that practically surrounds the lake, the seventh largest in the US, is not enough to store the water, so periodically floods occur in the riverine areas.

In addition, the controlled evacuation through the rivers, which is done when the level is very high, generates pollution of the rivers with agricultural waste that in turn produces the appearance of algae on the beaches.

In his budget plan Scott proposes to preserve the beaches 100 million dollars and 50 million for the state parks of Florida.

“People from all over the world come to Florida because of our beautiful natural treasures.In the last seven years we have taken historic steps to protect the lands of Florida, we have invested a record amount in the Everglades and in the hot springs of Florida, and to preserve our beloved beaches, “said the Republican governor.

The objective of this budget increase for the Department of Environmental Protection is “to ensure that the beauty of our state remains intact for generations to come,” he said.

He indicated that this allocation of funds is “especially important” because of the impact on the environment of Hurricane Irma, which touched land in Florida in September.