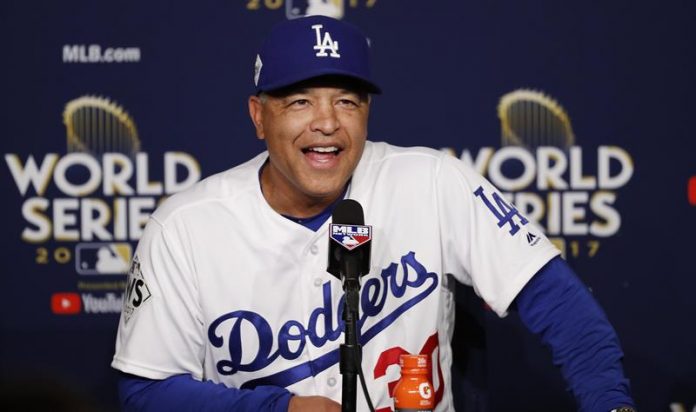 It was predicted that the Dodgers pitching would make a difference in the World Series and that’s what happened in the Sixth Game when they imposed their control from the mound and won 3-1 to the Houston Astros to tie 3-3 on the “Fall Classic” that will have to be defined on Wednesday in the Seventh Match that will be the decisive one.

This time, the Dodgers relief did its job perfectly, yielding just two hits and one walk in five dominant innings.

After the dizzying batting festival, which Houston won on Sunday 13-12 in 10 innings, pitching made its appearance for both teams, although it was better for the Dodgers.

The Dodgers relievers headed by Brandon Morrow, who retired Alex Bregman by a roll, so that the bases were full in the fifth act, were intractable.

Tony Watson (2-0), who achieved his second victory, retired Venezuelan Marwin Gonzalez by means of a balloon, with two on board and two “outs” in the sixth.

While the Japanese Kenta Maeda came out of a quagmire with two runners in the bases, in the seventh inning, when the third baseman Justin Turner threw the glove to a shot of the Venezuelan Jose Altuve and launched just in time to first baseman Cody Bellinger.

After squandering the lead in the ninth inning of the second game and losing the fifth, Kenley Jansen retired six batters in a row and also got his second save.

The out 27 came with a strike to the Puerto Rican Carlos Beltrán, a 40-year veteran, who had entered the Astros as an emerging.

While the Dodgers always had the opportune and productive bat with the young outfielder Joc Pederson who contributed a solo homer to send the ball over the wall of the left ranger.

During his triumphant tour, he hit his chest and danced on the trails, describing as many turns as those that this World Series has given, in addition to indicating to his companions with the fingers that they would have to pay him the money that they promised him if he improves with his batting.

The new comeback means that this Fall Classic must be defined in a manner congruent with the emotions it has brought and the equality that has been on the part of both teams that in the end will have to say everything in the Seventh Game, as the “canons” of the Baseball sport

Something that everyone agrees on, including the two drivers of the Dodgers teams, with Dave Roberts, and A.J.Hinck, responsible for the Astros.

“It’s barely adequate and fair,” Roberts said. “Today we were better and we deserved the victory against a great team.”

Before Pederson’s home run, center fielder Chris Taylor fired a double that tied the scoring to starter Justin Verlander in the sixth inning, Seager immediately followed with a sacrifice fly that meant the lead and the Dodgers already supported everything. his game in relievers.

If the Dodgers did, after losing two of three games in Houston, they managed to survive at home with the help of the Astros.

“We feed on this audience, no doubt,” Taylor said. “We believe that we have a great advantage because we are local and we are going to make the most of it”.

But it was Pederson who again deciphered reliever Joe Musgrove’s pitches for the lone home run in the bottom of the seventh inning.

It was his second homerun against the right in three games, and he extended to 24 the number of homers connected in a combined way in this World Series, which makes him a new brand.

Unable to hit in a section of this campaign, Pederson was sent to the minors. His teammates began to promise that he would be paid for the home runs he shot in the opposite garden, in an attempt to encourage him to hit the ball in another direction.

“In such a situation, one’s mind is erased,” said Pederson, who totals three homers in the series. “I’m going to have to watch the replay to realize what I did.”

The comeback in the sixth game and on the night of Halloween brought fans in Los Angeles the most delicious candy they expected to receive.

The Fall Classic has extended to seven games for the second year in a row, after the Chicago Cubs defeated the Cleveland Indians in 2016, also after overcoming a 1-3 handicap and winning the last two away matches.

The Japanese Yu Darvish will open for the Dodgers, who have not achieved the title of the World Series since 1988.

While Hinch was decided by the right Lance McCullers Jr., who was the one who worked and won in the third game played in Houston. “They are two incredible teams trying to get to the finish line first,” said Hinch. “Today we missed the decisive hits that did not come.”

It will be the first time in history that Dodger Stadium hosts the Seventh Game of a World Series. Darvish will seek revenge after taking a beating in the second inning of the third game, in which McCullers led Houston to a 5-3 triumph.

The outfielder George Springer hit a fly-by in the third act against left-handed starter Rich Hill, to give the advantage to Verlander and Houston, a team that has never won the Fall Classic, in 56 years of history.

But for the tenth time in the series, an advantage vanished. It is the fifth time that Houston has squandered a lead and this time it cost Verlander the loss that was the first since he arrived in Houston (9-1) with the Astros and that can cost him nothing less than a World Series title. Rubén Lojam