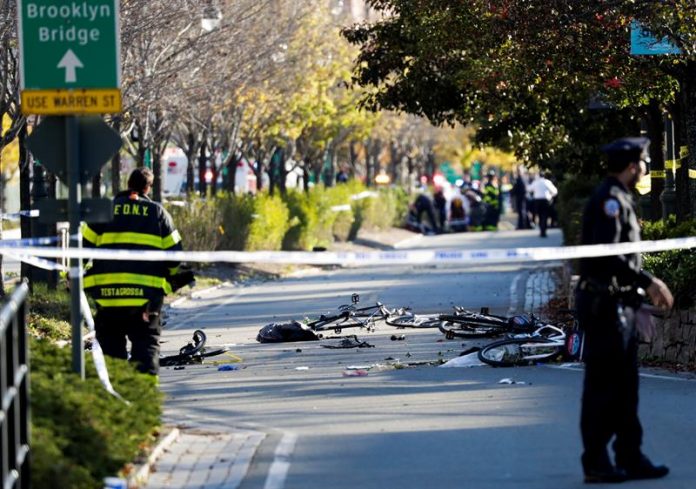 A terrorist attack, apparently of Islamic inspiration, today caused eight deaths and more than a dozen injured by a multiple hit in Manhattan perpetrated by a subject who was wounded by the police and has been arrested.

Although the authorities have only indicated that the subject is 29 years old, local media identified him as Sayfullo Saipov, an immigrant from Uzbekistan who had arrived in the United States seven years ago.

According to official reports, the subject, who was driving a van, broke into a bicycle lane in southwest Manhattan and ran over most people along about fifteen blocks.

The vehicle ended up crashing into a school bus and the subject got out of the truck holding a shotgun and a paintball gun, before he received one or several shots in the abdomen and was stopped.

According to local media, witnesses of the events heard how the attacker shouted “Allahu Akbar” (Allah is great). The police only confirmed that the subject, when leaving the vehicle, sent some shouts that were “consistent with the qualification of terrorist act”.

According to a person claiming to be friends with the attacker, Kobiljon Matkarov, the alleged terrorist recently lived in the neighboring state of New Jersey, although he had documents indicating that he had previously resided in the city of Tampa (Florida).

According to The New York Times, investigators have found two handwritten notes in Arabic near the vehicle used by Saipov in which their allegiance to the terrorist group Islamic State (IS) is noted.

The images recorded on mobile phones and reproduced by television showed the subject, with a long beard, walking down the street and carrying the two pistols.

The attack was recorded around 15.05 local time (19.05 GMT) and the area was completely cordoned off by police forces, official vehicles and ambulances.

“This is a quiet neighborhood, it’s very rare for that to happen,” Jailine Maldonado, a student at the City University of New York (CUNY), told Efe.

Bicycles on the pavement, injured and bodies covered with sheets was the scene shortly after the attack, which filled with awe and terror to passers-by, students and residents of that area.

Dozens of journalists and onlookers who captured on their phones the scene crowded the corner of Chambers Chambers and Greenwich in lower Manhattan, while some witnesses told of what happened, as Chris Velez.

Velez told Efe that he was walking towards school when he heard three shots. “I continued to school and went to the library where I saw two bodies on the street, one separated from the other and several bicycles,” said the 24-year-old.
“There was a lot of police and I heard the helicopters,” he added.

John Williams was walking through the area when he saw two women and a group of about ten children running towards him. “A girl of about five years old said there was an armed man and almost immediately I heard between five and ten shots,” the witness said.

He also indicated that he saw a man lying on the floor, face down, and another man running towards the park.

The mayor of New York, Bill de Blasio, described the attack as “a cowardly act of terrorism” that cost the lives of “eight innocents” who were in the area, near the bank of the Hudson River. 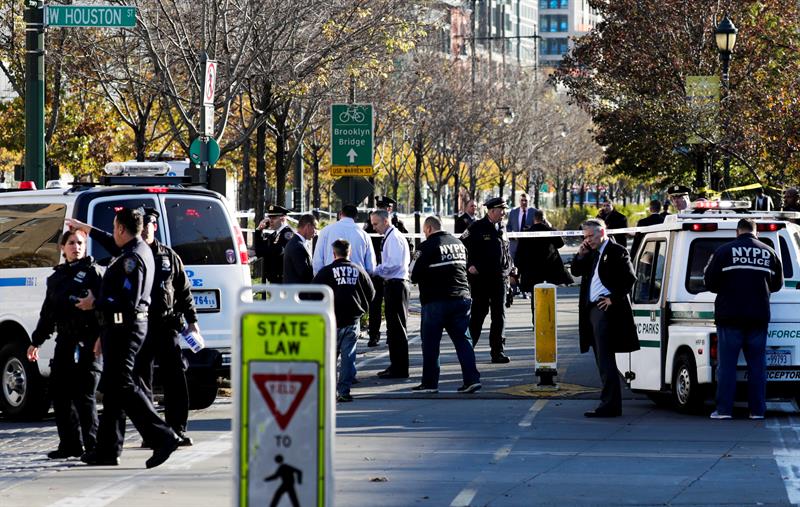 “It has been a horrible tragedy,” added de Blasio, who was accompanied by state governor Andrew Cuomo and New York Police Chief James O’Neill.

Six of the victims, all male, perished at the scene and the other two died while being transported to a hospital.
Two of the injured are minors who were on the bus with which the vehicle of the author of the attack crashed.

An exact number of injured people has not been provided, but the authorities indicated that there are eleven people who suffered serious injuries, although their lives are not at risk, and pointed out that there may be more people injured.

The incident occurred hours before the massive Halloween parade, which brings together thousands of people disguised by the streets of the West Village, near the scene of the attack.

However, the authorities indicated that the event would be held as usual and with a reinforced security presence.