The event counted with the massive presence of important consular officials of the Dominican Republic, representatives of journalistic associations as well as journalists from other nations such as Colombia, Venezuela, Mexico and Puerto Rico.

Miami Florida.- The new board of directors of the Dominican College of Journalists, CDP, a subsidiary of Florida, assumed its functions after being sworn in by the president of the Institute of Protection and Forecasting of the Journalist, IPPP, Juan Carlos Bisonó, who represented Professor Adriano de la Cruz, president of the agency in the Dominican Republic.

In the event held at the EB Hotel of the City of Miami, conducted masterfully by journalist Geidhy de la Cruz, former president of the CDP subsidiary in Puerto Rico, Juan Carlos Bisonó took the oath to the new president who heads the subsidiary in Florida , Marcos A. Tejeda, deputy to Jesús M. Rojas, undersecretary, Mayra la Paz, secretary organization, Rose Mary Santana, in Public Relations, Ana Lucía Ortega in Finance, Rubén Morillo and Vanessa Rivera as members for the period 2017-2019.

Prior to the oath, the president of the IPPP reaffirmed the commitment assumed by the new collegial authorities in the sense of promoting actions for the benefit of the journalism union.

Bisonó, speaking on behalf of Professor Adriano de la Cruz, said that the CDP must work hard and set out to separate “wheat straw”, making reference to the Dominican College of Journalists, which will assume its role of defending the profession in the sense that we all know that many people who are professionals in other areas are usurping, so to speak, functions of journalists.

“The Executive Committee of the CDP, works on the subject of the new Law before the National Congress of the Republic for these purposes,” he said.

“We are immersed right now in the debate for people to give their opinions. We do not want it to be said that we are restricting freedom of expression. Our desire is that everyone can say what they want, however, shoemaker to their shoes as we say in the Dominican Republic, “said Bisonó.

“As a journalist I can not go to the operating room, I can not go to a stand, so those of us who have studied and prepared for this profession and are in the exercise of journalism, are the ones who are called to develop this work of journalists” , said Juan Carlos Bisonó, who previously sworn in the subsidiary of the institution in New York.

Marcos A. Tejeda, received the subsidiary from journalist Tony Castellanos, who led the union during the 2015-2017 period. When he spoke a few words, he outlined part of his administration and thanked everyone for the support of the guild.

While the new president of the CDP in Florida, Marcos Tejeda, after being sworn in by the union authorities, said that “he is attached to all his work team is directed to give continuity to the programs of the former presidents of the union, among which are Martina Soriano, Miguel Acevedo, Rose Mary Santana, José Carvajal, Juan Colón, Pablo Rodríguez. ” He also said that immediately work will be done on what is the organization of a large meeting that will meet the presidents of the subsidiaries and will be held in Miami.

“One of our most pressing concerns is to strengthen ties with our authorities in the Dominican Republic. We take advantage of the opportunity to ask the CDP authorities in the country to pay due attention to the building that houses the guild and the deplorable conditions in which they said they are. ”

Tejeda, thanked the kindness of Brenda Solano and the executives of the Hotel EB, for their willingness to make the event very successful. 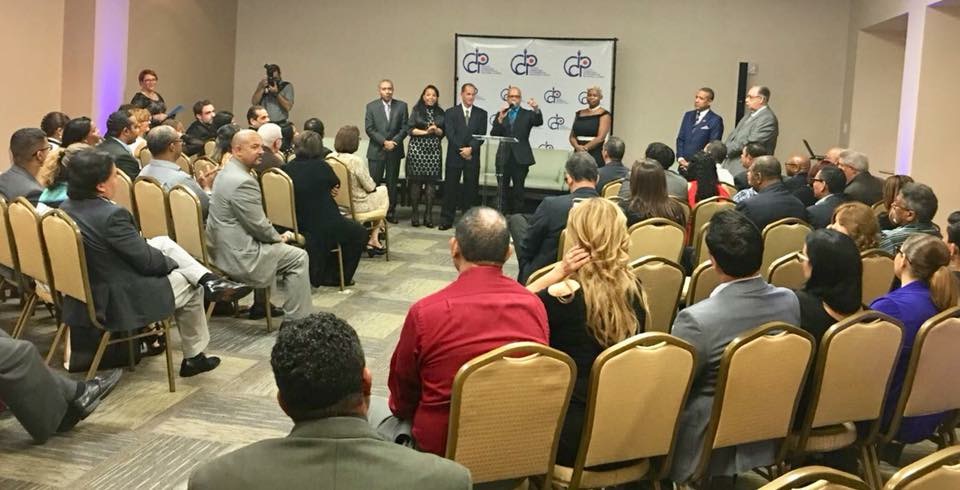 Act
He started in the lobby of the cozy Hotel EB, where the exquisite interpretation of Maestro Alejandro Vargas “Colita” of the musical genre considered “World Heritage”, the merengue, delighted the attendees with the succulent toast for the guests’ enjoyment served with distinction by the hotel waiters.

When they went to the main hall, in the presence of Rossy Freeman, representing the Dominican state legislator, Daisy Baez, a minute of silence was requested for the death of her mother and the memory of journalists like Arturo López and Claudio Hanley was remembered. deceased

We thanked José Rosario, who collaborated in the organization of the event, as well as Melody Then, among others. The sponsorship of Brian Peña and Ron Barceló and the artistic company of Johnny Minaya were thanked.

One of the most emotional moments in the act, was when the famous Dominican artist, Daniel Santacruz, nominated to the Latin Grammy in five opportunities, delighted with his beautiful songs to the assistants, throwing ovations and applause in the special night in which the new directors of the CDP assumed functions.

Trump health bill no options after opposition from two other Republicans

The new Health Bill proposed by the Donald Trump government was left with no apparent prospect of progress in the Senate after two other...

Colombian Julio Teherán shone from the top of the mound to throw solid and remain unbeaten in games outside of his field so far...

San Francisco, .- YouTube today announced that it has withdrawn "tens of thousands" of videos from its platform showing the terrorist attack last Friday...

Twitter cancels more than 70,000 profiles that spread conspiracy theories in the wake of the Capitol robbery

The social network Twitter reported this Monday that it has permanently canceled more than 70,000 profiles from its platform that spread conspiracy theories and...

The Armed Forces informed today of the death in Libya of eleven terrorist suspects of Al Qaeda in the Islamic Maghreb (AQIM) during a...