Tillerson visits Afghanistan by surprise and meets with Afghan President

Ukraine says it “does not rule out” that Russia “is...

More than 2.1 million people have fled Ukraine since the...

Zelensky offers Putin to negotiate to stop the war in...

NATO and the EU stage their union and warn Putin...

US Secretary of State Rex Tillerson arrived in Afghanistan today on a visit to the country’s President Ashraf Gani, officials said.

“Secretary Tillerson and President Gani met in Kabul on October 23 and together reaffirmed the Afghan-US commitment to achieve lasting peace, stability and prosperity in Afghanistan,” the US embassy said in a statement.

Tillerson reiterated the United States’ “clear” commitment to peace in Afghanistan through Washington’s new strategy for South Asia, in which the number of troops deployed on Afghan soil last month increased by 3,000, according to the statement. .

In addition, the plan reaffirms the US intention that “terrorists who threaten this goal” will not be given refuge, “the statement added.

The secretary called on all his allies, especially Afghanistan’s neighbors, to take “practical” steps to implement the strategy, while pledging to continue his support for Kabul in “all” camps, the Afghan Presidential Palace in a statement.

At the meeting, also attended by Afghan government chief Abdullah Abdullah and national security adviser Haneef Atmar, Gani said that the new US plan has created a “positive” change in the region.

While reaffirming its support for the strategy, the Afghan leader said it will help bring security and peace to the country. 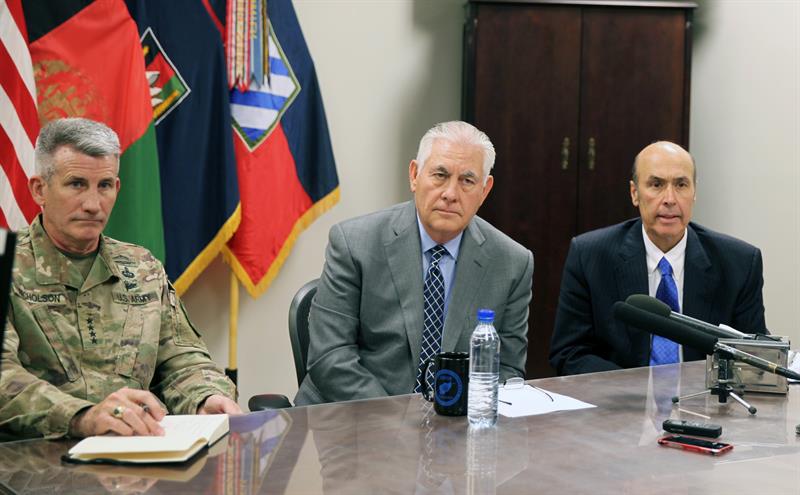 In this line, Abdulá warned that “the countries of the region must realize the importance of change in the environment and must work to ensure peace, stability and economic well-being,” according to the Presidential Palace.

The United States last year increased its contingent of 8,400 troops already in Afghanistan as part of the NATO training operation and in counter-terrorism tasks.

Along with the announcement of the plan, the United States hardened its speech toward Pakistan, which Kabul accuses of sheltering the terrorists operating in its territory.

When he announced the strategy last August, US President Donald Trump said Pakistan has “a lot to lose” if it continues to “harbor” terrorists after years of accusations by Kabul and Washington.

Since the end of the NATO combat mission in January 2015, the Kabul government has been losing ground to the Taliban until it controls only 57% of the country, according to the Special General Inspector for Reconstruction of Afghanistan (SIGAR). Congress of the United States.

RD seaports meet with executive executives from Florida and the Caribbean

San Juan, Puerto Rico.- Cruise line executives meet with representatives of the different ports of the Dominican Republic, at the 26th Annual...

"Black Panther", the Marvel superhero film, continued as the box office leader for the fifth week in a row, a brand that did not...

New York.- The Chief Executive of United Airlines, Oscar Muñoz, already assumes the chairmanship of the group in 2018, said today the company, days...

Denounces the US naval mission in the Caribbean and assures that it is a "smokescreen" of Washington to its poor response to the pandemic The...

The Federal Reserve says it can afford "patience" before the next interest rate hike and waiting for confirmation that low inflation data is transitory,...