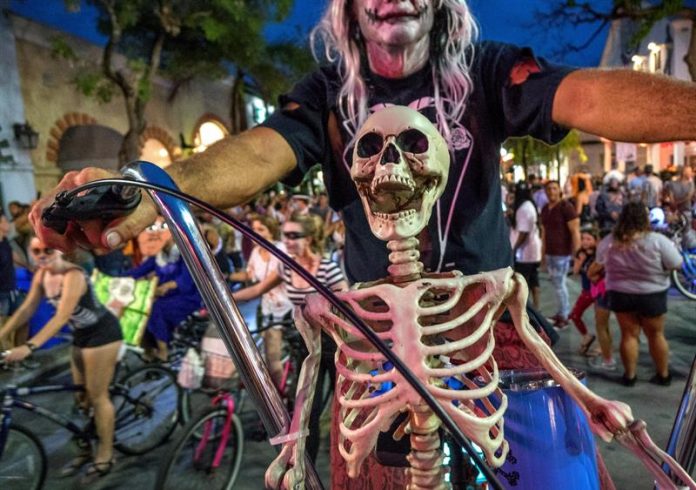 Key West, Florida, has not been intimidated by the devastating impact of Hurricane Irma last September and has launched its colorful annual “Fantasy Fest”.

The festival, which celebrates its thirty-seventh anniversary, presents a program with more than a hundred activities from October 20 to 29, including the “Zombie Bike Ride”, the annual zombie invasion.

According to the organizers, during the two weekends closest to Halloween (October 31) gather in bars, restaurants and hotels more than 75,000 revelers who flock to the island to learn about the culture of the Florida Keys.

The event has become a classic that brings about 30 million dollars annually to the economy of Key West and neighboring cays, this year battered by the effects of Irma, who on September 10 landed on this set of islands which covers an area of ​​124 miles long with category 4.

The economy of the Cayos, where more than a dozen people died and it is estimated that 25% of the buildings were destroyed by Irma, depends heavily on tourism.

The Fantasy Fest 2017 started this Sunday with a parade of thousands of people in disguise and mounted on bicycles, many of them accompanied by their mascots, also in costumes.

It is what is known as the “Zombie Bike Ride”, which has been held for seven years.

Without releasing their mobile phones to immortalize the moment, a ghost pharaoh, a skeleton biker, an ashen corpse and some newlyweds with a string of tibias and ribs dangling from their tandem paraded through the Duval Street of Key West.

Cadavéricos pirates accompanied by their cadaverous mascots, bloody gladiators, dead witches and even a pitiful statue of liberty lived together with some of the most current figures in the entertainment scene, such as the characters from the hit series “Game of Thrones” the “white walkers”.

These strange, humanoid-looking creatures, white hair, glazed blue eyes, and disproportionate force, had a presence on the march, but this time they left the winter to enter the tropical climate of Florida and wear their bikes equipped with neon lights.

There was no shortage of Mexican-born Catrina skulls, skeletons, the ruthless assassin Freddy Krueger, diabolical clowns and dolls, zombie doctors and those who have a knife through their skull do not impede them to enjoy the good atmosphere of the festival. 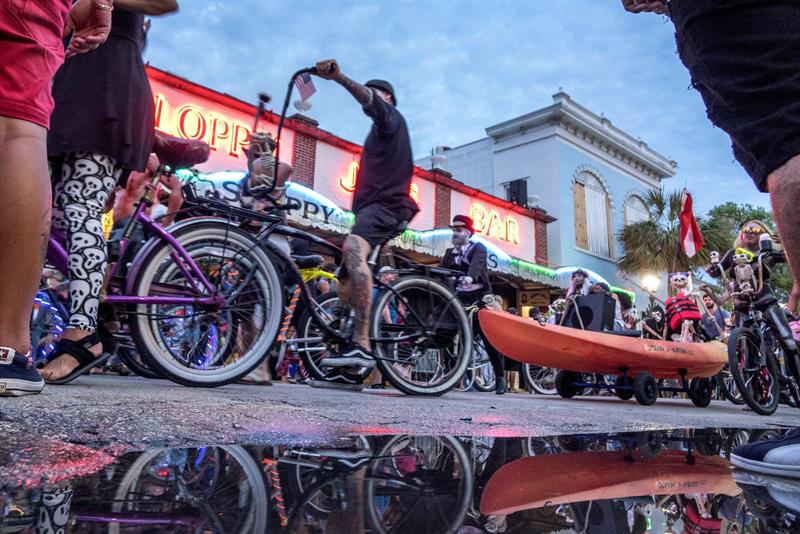 Prior to the beginning of the tour the families could take on a terrifying appearance in some designated spaces where the artists made body make-up and paintings that the “living dead” exhibited during the bicycle ride.

In spite of the blood-soaked painting and the lugubrious aspect of Key West, joy and relaxation reigned where only a month ago there was devastation, tree-clumps and accumulated debris.

The zombie bike tour is part of one of the many parades of the “Fantasy Fest”, a 10-day outdoor event, which each year adopts a different theme to inspire adults and children to create the best costume.

This year’s motto, “the journey in time unravels”, is timeless, unlike those of previous years, that were dedicated to different epochs of history.

Participants are free this year to decide on what space-time they want to base their costumes on.

Thus, the colonial era, the Roman Empire or the android era can meet this year in Key West, which this year has about a hundred scheduled activities, including theme parties, markets, parades, concerts and costume contests for people of all ages and even for pets.

The festival will conclude next Sunday, with activities for children and a party at sunset.