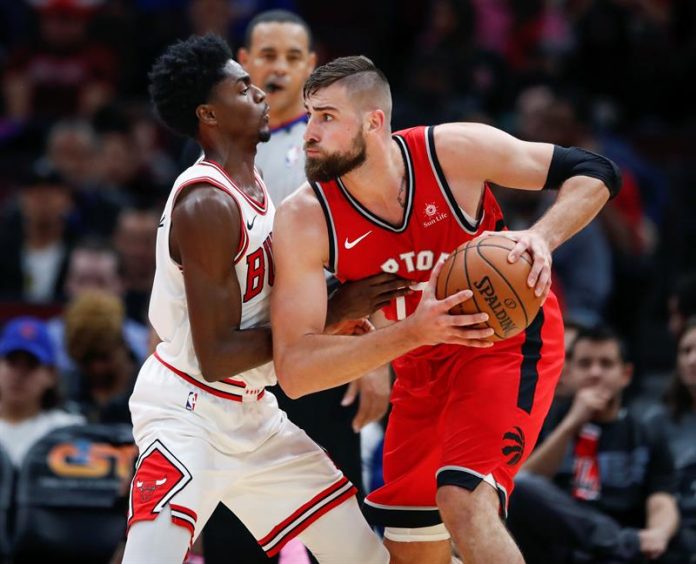 Lithuanian center Jonas Valanciunas contributed double-double of 23 points and 15 rebounds that left him to the front of the balanced attack and winner of the Raptors of Toronto that they prevailed by 117-101 to the decimated Bulls of Chicago in the inaugural game of the season .

Valanciunas led a list of five players, including three starters, who had double-digit numbers and as a team the Raptors achieved a 47 (39-83) percent hit in the field and 45 (13-29) triple shots .

Spaniard Serge Ibaka played 24 minutes as the Raptors’ striker and scored eight points by scoring 3 of 8 field shots, including 2 of 4 3-pointers, four rebounds and two caps.

Cuban American center Robin Lopez emerged as the top scorer of the Bulls with 18 points, eight rebounds and two assists.

While the Finnish power forward, rookie Lauri Markkanen, 20, made his NBA debut with an outstanding performance of 17 points and eight rebounds.

Markkanen left the starting lineup after the Spaniard Montenegrin Nikola Mirotic suffered an assault during training on Tuesday by teammate Bobby Portis, who produced the upper jaw and a concussion.

Bulls coach Fred Hoiberg said he had spoken to Mirotic and that he was getting better, although he still had pain in his face after the fractures he suffered.

Hoiberg also reported that he had spoken to Portis, who felt sorry for everything, and said that the Bulls player, despite unsportsmanlike actions, was an excellent person and professional, but he was wrong with his actions.