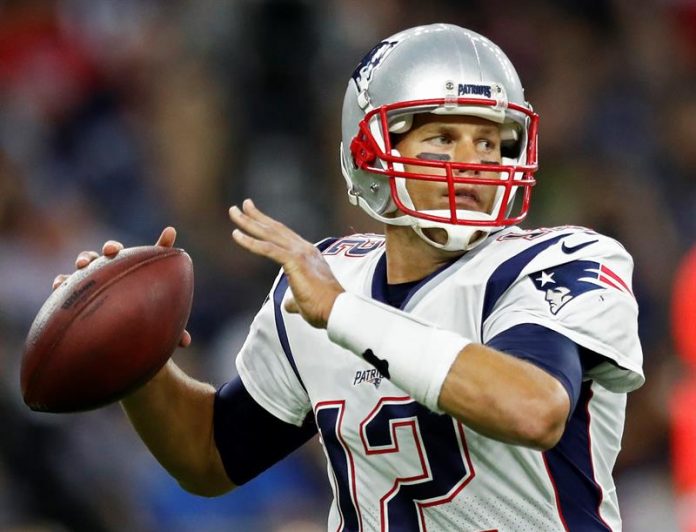 Sunday Night of Week 6 of the National Football League (NFL) left the quarterback Tom Brady with a new record in number of wins in the regular season of life for reaching 187.

Also the first defeat of the Chiefs of Kansas City, the last equipment that maintained mark undefeated; runner Adrian Peterson made a triumphant debut for the Arizona Cardinals; Field Marshal Deshaun Watson made history; while stellar passer Aaron Rodgers suffered a clavicle fracture.

Brady led the Patriots to a 17-24 win over the New York Jets and lifted the league record in number of lifetime victories in the regular season by reaching 187.

Brady’s victory was not easy, but he broke a tie he had with Peyton Manning and Brett Favre, both retired, to impose a league record.
Brady completed 20 of 38 passes for 257 yards with two touchdowns and one interception for the Patriots.

Runner LeVeon Bell landed 179 yards and a touchdown and the Pittsburgh Steelers came in with a 13-19 win over the Chiefs, who were no longer the undefeated team of the season.

Veteran quarterback Ben Roethlisberger completed 17 of 25 passes for 252 yards with one touchdown and one interception sent for the Steelers (4-2).

While the Chiefs (5-1), the only team that remained undefeated so far this season, had its first loss, but continues to lead the league with the best mark.

Peterson scored two runs and 134 yards in his debut for the Cardinals, who beat the Tampa Bay Buccaneers 38-33.

Peterson, traded with the New Orleans Saints on Tuesday, drove 26 times and scored 27 yards in Arizona’s first possession.
The runner returned with his one-yard ground attack also in the fourth quarter for the Cardinals (3-3).

Watson made history with three touchdowns as he became the first rookie in NFL history with at least three touchdown passes in three consecutive games, and the Houston Texans outscored the Cleveland Browns 33-17, one of the two teams that still do not know the victory so far this season (0-6).

The Texans’ field marshal already has 15 touchdown passes so far this season, which represents the best record in league history by a rookie in the first six games of a team.

Watson completed 17 of 29 passes for 225 yards, with three touchdowns and one interception.

The Packers (4-2) lost Rodgers, who had a fractured right clavicle, when he was caught by defensive player Anthony Barr, who knocked him down and the quarterback fell on his collarbone.

The quarterback had to leave the field with the assistance of a safety car and according to the first medical reports, Rodgers, 33, could be lost with the team for the remainder of the season.

In other results, a powerful Saints defensive squad forced five turnovers and scored three times, a franchise record, to defeat the Detroit Lions 52-38.

Pharoh Cooper kicked off the start of the game 103 yards and put the ball in the area of ​​the diagonals for the first of two touchdowns of the special teams that helped the Los Angeles Rams to defeat the Jaguars 17-27 Jacksonville.

Kicker Nick Novak scored a 32-yard field goal in the final play of the game and the Los Angeles Chargers defeated the Oakland Raiders 16-17 in an NFL game of Californian teams.

Quarterback Kirk Cousins ​​pitched for two touchdowns and scored once and despite his inconsistency in the gridlock led the Redskins from Washington to a 26-24 win over the San Francisco 49ers, who still do not know the triumph in the that goes of season.

The Redskins (3-2) hold second place in the NFC East Division, while the 49ers (0-6) are the second NFL team not yet