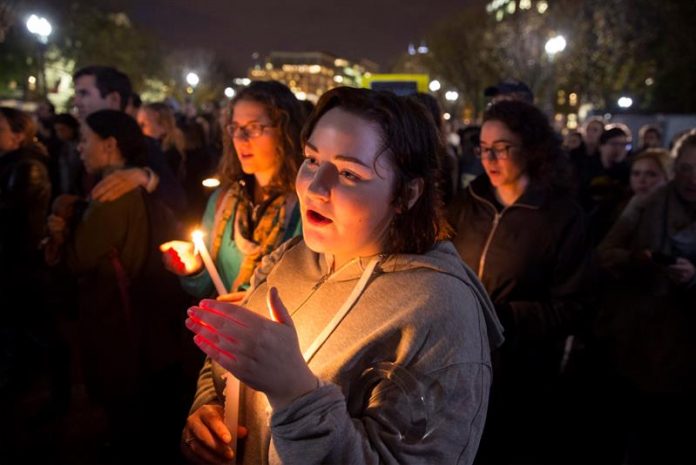 The community of Orlando remembered the 59 dead of the Las Vegas massacre this Sunday during a vigil on an esplanade in which they had also paid tribute to the 49 people massacred in that city.

With one minute of silence, followed by 59 bells, for each of the victims, the event began in Orlando, which still remembers with pain the death of 49 attendees to the Pulse club who were shot dead by Omar Mateen on June 12 2016.

“Our feelings are right now with Las Vegas residents whose lives have been shaken by this horrific tragedy,” said the organizers of the event.

Stephen Paddock shot indiscriminately this Sunday from the window of his hotel in Las Vegas, killing at least 59 people and injuring about 500.

The Las Vegas massacre, surpassed Sunday’s Pulse, as the worst firearms in recent history in the United States.

“We are ready to assist and support the people of Las Vegas as they begin to navigate the recovery process that follows this tragedy,” said One Orlando Alliance representatives, organizers of the event.

It is “a meeting of love and support from Orlando to Las Vegas,” said the nonprofit coalition, which groups more than 30 similar organizations, especially the LGBTQ community, which was created to help victims and their families. relatives after the massacre.

The vigil was held on the front esplanade of the Dr. Phillips Center for the Arts, where a group of volunteers dressed as angels walked slowly around the place as the bells turned.

“We recognize that this tragedy could be particularly difficult for some members of our community who are still facing the impact of what happened in Pulse,” said One Orlando Alliance.