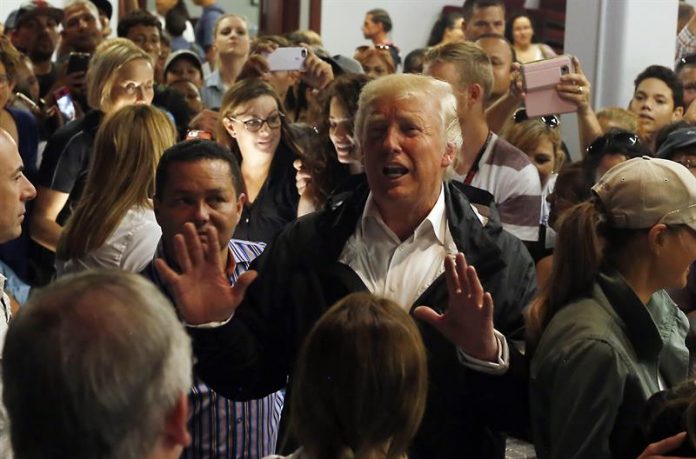 US President Donald Trump believes that Puerto Rico’s debt will have to be liquidated, he said during his visit to the island to assess the devastation caused by Hurricane Maria.

“We’re going to have to liquidate that (debt). You guys are going to say goodbye to that, I do not know if it’s [the bank] Goldman Sachs, but whoever it is can be fired from that,” Trump said in an interview with the chain Fox made in Puerto Rico.
“We are going to solve it,” he said.

The bankruptcy of Puerto Rico, with an unpayable debt of about 70,000 million dollars, is considered the largest bankruptcy of a territory under US jurisdiction. in all its history.

The United States-approved Fiscal Supervisory Board for Puerto Rico said Tuesday that addressing the humanitarian crisis caused by Hurricane Maria “immediately and providing the necessary funds to rebuild critical infrastructure is an essential first step in putting the standing island again “.

The number of deaths as a result of the cyclone has risen to 34, according to Puerto Rico’s governor, Ricardo Rossello, and the material damages amount to about 90,000 million dollars.

Trump was able to see on Tuesday the devastation caused in Puerto Rico two weeks ago by the passage of Hurricane Maria, which the president downplayed the importance of the low number of victims and was not, in his view, “a real catastrophe.”

“If you look at a real catastrophe like Katrina … hundreds, hundreds and hundreds of people who died, and you look at what happened here, with a storm that was really overwhelming,” Trump said upon arrival at the base Luis Muñiz de San Juan in reference to the cyclone that struck New Orleans in 2005 and left more than 1,800 dead.

The president’s trip has been involved in the controversy since before even being conceived since, unlike what happened in Houston, a city that came just a couple of days after Hurricane Harvey, Trump has taken almost three weeks to go to Puerto Rico.