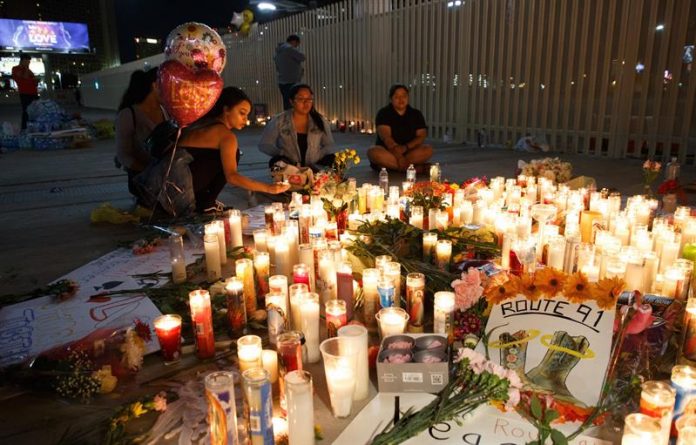 The city of Las Vegas is turning to the victims of the Sunday massacre and its relatives: schools offer psychological support to children and families, several hotels give free rooms to relatives of those affected and people line up to donate blood .

Less than 48 hours after a 64-year-old man fired at an outdoor concert and killed nearly 60 people and wounded more than 500, the game city, its organizations, leaders and companies began to evaluate the needs generated by the tragedy and to offer their help.

Station Casinos announced free hotel rooms for families of those who “were sadly affected by yesterday’s tragic event and are traveling to Las Vegas.”

The chain, with 18 locations throughout Las Vegas, wants to help those people “during these difficult times,” according to a press release.

Other large companies and operators such as Boyd Gaming Corp, Siegel Group Nevada INC and South Point Hotel and Casino have joined this hotel corporation.
Each of these organizations has its own identity verification system, backed by the Las Vegas Metropolitan Police, to ensure that it is really the families of those affected who receive the help.

The Clark County School District (CCSD) began the day by sending a message to each and every parent by phone or e-mail to let them know that there are qualified staff at each school and ready to serve students who require support and emotional counseling.
The school superintendent himself sent the communiqué to the parents. “We thank them for their patience and cooperation, and we want them to know that counseling services will be available to students in all of our schools,” says a message from thousands of families in the Las Vegas Valley.

Dan Triana is the Director of SLAM, a charter academy that welcomes middle school and high school students and is also dedicated to helping them match that emotional blow.

Triana says that, like all other schools in the county, SLAM is being offered counseling, but it is also working to get the school to link to the community in an effort to help victims directly.

“We contacted the American Red Cross and offered them our school to be a blood donation center where the community could come in. We are working on that,” he said.

According to experts, it is not easy for a minor to assimilate a fact like the one happened Sunday night (Monday morning on the East Coast) in the so-called “city that never sleeps”.

So far only the name of 21 people who have been killed by automatic gunfire that Stephen Paddock made from the window of a room of the Hotel Mandalay against people attending a country music festival held in a nearby park .

Several sources cite the death of Paddock in almost 60 years, who after the slaughter took his own.

The different churches and religious centers of the city have united around vigils and days of prayer.

In some cases, priests, pastors, and congregational leaders are simply listening to their parishioners or anyone who wants to talk about what happened, wants to be heard, or seeks comfort.

Regardless of denomination or creed, the community has been told that you can go to any of these centers where you will find someone who can offer you advice or simply a friendly face with whom you can vent.

The city has established an economic aid fund for the victims. In less than 24 hours it has collected more than $ 3,793,000 and the goal is to be able to get 4 million and a half dollars.

According to Mayor Carolyn Goodman, those funds will be used to help with the surgeries and medical care of the injured, the help family members need, and all the recovery related to losing or hurting a loved one.