The city of Las Vegas (Nevada) still remains overwhelmed by the Sunday night shootout that left nearly 60 dead and more than 500 injured, while family members and friends suffer the slow process of identifying victims and more details are known about the investigation of the case.

Author of the massacre, Stephen Paddock, 64, fired from a Mandalay Bay hotel room against the thousands of attendees of a country music festival with automatic weapons and then killed himself.

Marilou Danley, a Paddock couple, was declared a “person of interest” in the investigation today, Las Lombardo County Sheriff Joe Lombardo confirmed at a press conference.

Lombardo was asked about information released today by NBC about a $ 100,000 transfer made by Paddock last week to an account in the Philippines, the country where Danley is and where he is currently.

“We will not comment on that for now, but we will update that information soon. The investigation has not ended Paddock’s death,” he said.

According to NBC, Danley, 62, had traveled to Hong Kong on September 25, three days before Paddock entered his Mandalay Bay hotel room, where he shot the public at the country music festival Route 91 Harvest.

Sources from the investigation told the channel that Danley will return to the US on Wednesday.

According to the same sources, the couple resided in Mesquite, about 130 kilometers from the scene, in the same home where police found Monday 19 firearms.

Paddock had 23 others in his Mandalay Bay room, as well as explosives. Lombardo added that seven other guns have been found at one of the attacker’s other homes, located in Reno, Nevada.

“Was this person radicalized without our knowledge of it? We are trying to answer that question,” said the agent.

The sheriff also confirmed that all those killed in the shooting were identified with the exception of three people, a task in which the Federal Bureau of Investigation (FBI) is collaborating, focusing on the collection and verification of documentation.

Among the victims, confirmed by relatives and local media, is Sonny Melton, 29, who saved his wife, Heather, a nurse by profession. The couple had been married last summer.

Also Sandy Casey, 35, who was a teacher specializing in working with children with special needs, and Jessica Klymchuk, 28, a Catholic school worker, had just announced that she would marry her boyfriend, Brent Irla. 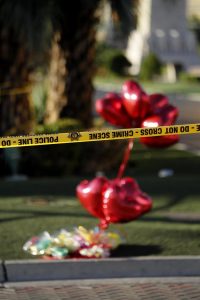 Also on the list is Kurt Von Tillow, 55, described by his brother-in-law as “the most patriotic person you’ve ever met,” according to local KCRA3.

“I’m sure he’s covered in red, white and blue (the colors of the American flag), with a Coors Light (beer) in his hand, smiling at his family and listening to music,” he said.

President Donald Trump will visit Las Vegas tomorrow, Wednesday, to meet with the families of the victims and the police.

Trump said today that the shooting was the work of “a man of insanity” and again avoided talking about the control of firearms in the country.

Speaking to reporters before traveling to Puerto Rico, the president described the attacker as “a sick man”, “a man of insanity”, “with a lot of problems, I imagine,” not to mention that 23 firearms were found in the hotel room from where he shot at concertgoers.

“It’s a very sick individual,” Trump settled, avoiding condemnation or simply referring to gun violence, in the same vein as his statements from Monday’s White House, where he merely reproached the event as “a act of pure evil “without mentioning at any time the word” weapon “.

In a press conference shortly after that appearance, presidential spokeswoman Sarah Sanders said it was “premature” to talk about legislation for greater arms control and felt that debate could be held later, although Trump, he recalled, is ” a strong defender “of the right to bear arms.

Since the 2016 election campaign, Trump has aligned itself with the position of the National Rifle Association (NRA), opposed to increased gun control.