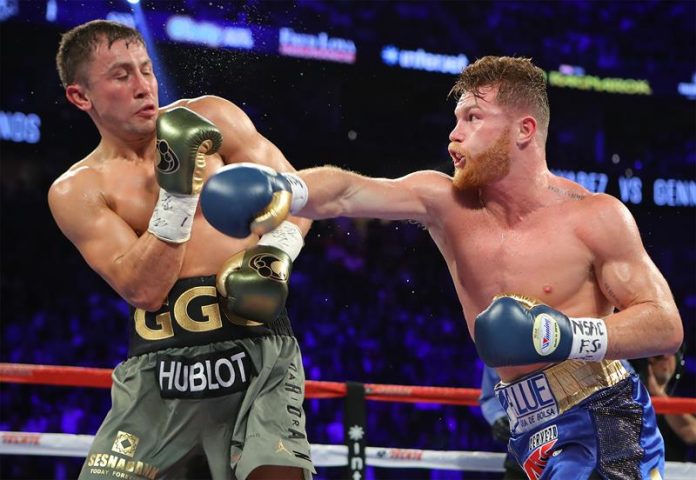 While Golovkin and Alvarez completed the 12 rounds that had been agreed to defend the middleweight title, International Boxing Federation (IBF), World Association (WBA) and World Boxing Council (WBC) versions, with exchanges of permanent strokes that showed As the fight matched, Byrd saw it all different.

When it came time to know the score of his cardboard, the announcement of 118-110 points in favor of Alvarez, made the 22,358 that filled the seats of the stands of the T-Mobile Las Vegas exploded with a booming deafening.

The fans’ protest went further after the announcement of the second judge, Dave Moretti, who read the card and saw Golovkin (115-113) winner, while the third in discord, Don Trella, wrote a tie (114-114).

Once again, the scandal was assured, regardless of the fact that the fight had been historical by the delivery of both pugilists, that when receiving the final verdict of “null combat”, did not leave satisfied neither of the two after having completed a great work in favor of boxing after the “fraud” and “theft” of the farce mounted by junior Floyd Mayweather and Conor McGregor.

While Golovkin declined to comment on the verdict, with a diplomatic exit: “I have nothing to do with the judges’ decision, I just give it all in the ring,” Alvarez said he had been the winner in at least eight rounds .

“He never hurt me with his punches and I had him several times touched. I’m ready for the rematch if he has to give and also to win,” he announced.

But those who did have to go out and immediately explain to the journalists about the voting scandal were the Nevada State Athletic Commission’s executive chairman Bob Bennett and the promoter of the evening and representative of Alvarez, Oscar De La Hoya , owner of Golden Boy Promotions.

Bennett tried to ‘make up’ the serious mistake made by Byrd, which he defined as a good judge, but who was wrong.

“Adalaide from my point of view is a great judge.He has done more than 115 championship fights, she has done a great job in our training, unfortunately she did not have a good day.He saw a fight very different from the other judges.That happens some times, “Bennett explained.

De La Hoya, who saw Alvarez win in seven of the 12 rounds, also had to acknowledge that Byrd’s score was unwarranted and had done great damage to boxing.

“Unfortunately when tonight we would have to talk about the great fight that have played both Golovkin and Alvarez, now everyone is talking about the verdict and Byrd score,” De La Hoya stressed.

“I thought it was a close fight, and although I’m not a judge I do not understand the score of 118-110 in favor of Canelo,” he said.

Especially because as confirmed, in the contract, the revenge was assured if Golovkin won, not so if the winner had been Alvarez, who had no obligation to give it, and now with the void will have to negotiate, but was confident that ” give to”.

Especially after the profits that have left the first with more than 30 million dollars box office and two million people who bought the fight to watch it on pay-TV, with a price of 80 dollars each.

While the Golovkin (37-0-1, 33 KO’s) bags, an undefeated champion, who made his nineteenth title defense, the second longest in boxing history, and Alvarez (49-1-2, 34 wins by the fast track), did not exceed the eight million dollars combined.

Álvarez received five million dollars and Golovkin got two more guarantees, aside from the percentage of pay-TV revenues.

Golovkin said he did not know if there will be a rematch, either close or late.
“I only do boxing and tonight our sport has triumphed, the rest of the team is in charge of my work, now I’m just thinking of relaxing and trying to rest, and then we’ll see,” he said.

However, his physical trainer and man of confidence, Mexican Abel Sanchez was categorical when he said that the fight had been won by his pupil 116-112, but that the judges had gone to different schools.

“Álvarez ran through the ring more than we thought, but he did his fight and Golovkin also with a boxing that was superior because he always attacked. What happened has not surprised us because we knew that we were coming to a war,” he said. said Sánchez.

However, he was categorical when defining as a great fight the protagonists of both fighters, but with the misfortune that “was witnessed by a judge who was blind.”