Between cleaning up the effects of hurricane Irma in Puerto Rico and with very specific plans to maintain his health, the artist Draco Rosa embarks on a new stage of his musical tour of the United States.

“Compared to what happened in other Caribbean islands we are well,” Edward Edward Suarez, better known as Draco Rosa, told Efe.

“It is very serious what they suffered and suffer in Antigua and Barbuda, San Martin, Cuba and even in Florida,” he added in an interview from his studio in Utuado, on a coffee farm in central Puerto Rico.

It was in that place, in his communion with nature and the intimacy of his family that Draco Rosa decided that in 2017 he wanted to reconnect with his other “family”, as he calls his fans, from the basics and in the concerts that lead him to Texas and California have opted for a kind of controlled spontaneity.

“This is an experiment, I do not have a precise list of songs, not even a quantity, nor a band,” said the 48-year-old composer of iconic songs in the Spanish pop song “María” and “Living the crazy life “among many others. 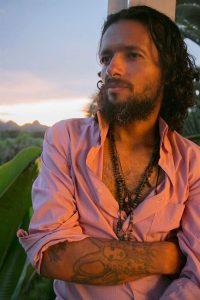 But, “I have many musicians I can work with. We see who is available,” he said.

“It’s an organic and simple process and it’s what I offer the public.” Sometimes I sing, others sing together. “There is no formula,” he added.

Nevertheless, Rosa affirmed that she does not do it to surprise. “I’m not a magician and I’m not interested in keeping anyone in suspense.”

He also said that he is betting on the easy way in the new stage of the concert series ‘An Evening with Draco Rosa’ (Una noche con Draco Rosa).

The show, with a romantic twist and anchored in an electric guitar and Rosa’s voice, is a more minimalist version of “The Sacred,” which he calls the spiritual half of his grand tour “The Sacred and the Damned” which began in 2016.

“Now what I want is to stay calm and healthy,” said the singer-songwriter and producer who battled twice the cancer known as non-Hodgkin’s lymphoma.
“I have gone through a lot of stages, a lot of depressives, with a great loss and existential crisis, always looking for the light,” he acknowledged.

“I’ve learned that I need that contact (with the audience). The sharing on the stage fills me with life,” he confessed.

Although the music was relegated to the background during the worst stages of his illness, the artist stated that he has ended up understanding that it is what “gives balance to my life, it is my personal oxygen.”

However, in order to find that kind of emotional oxygen she had to take good care of herself, and while still under a medication regime, Rosa recognized that the tours are a challenge for her health.

“Silence is very important, and so is connecting with God,” he said as he spoke about how he prepared himself before he stepped onto the stage.

He added that sleeping is also a big challenge for him, “because I am a night person, but I have to be disciplined to be professional and to be well awake at concerts,” he acknowledged.

As for her food, she indicated that she is strict, following the doctrine she described in her book ‘The secret of life based on plants’, which she wrote with her nutritionist Nena Niessen.

And in the middle of all these activities, which include taking care of his product “Café Horizonte”, the artist indicated that he has continued to compose, although he refused to give details about his new material which he acknowledged has a little bit of everything.

“The only one who knows what is going to happen (musically) on a certain day is my little heart,” he said.

“I do not write songs, I do not listen to music of a certain genre.” I love salsa and rock, I make music in every genre, I feel like the blues today, but maybe tomorrow I’m going to listen to Juan Gabriel. depends on the feeling, “he concluded.

The Democratic Party of the United States will present this Tuesday in the House of Representatives the first legislative initiative to regulate the impeachment...

Great artists like the Spanish Raphael and the Mexican Gloria Trevi arrived tonight dressed in their best clothes to the sixth edition of the...

One in four people with the HIV / AIDS virus in Latin America and the Caribbean do not know it, the Pan American Health...

Women shine in an Oscar of redemption and without surprises

Women and feminist proclamations shone today at the Oscars, prizes without great surprises that served Hollywood to redeem themselves for the countless sexual scandals...