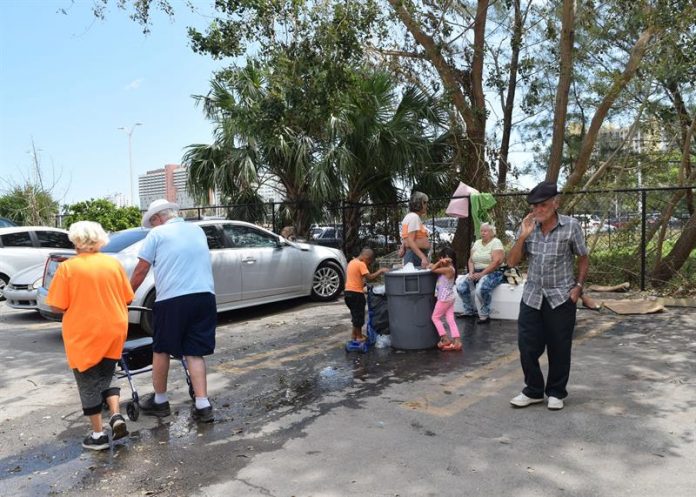 Thus, the Bahamas Paradise cruise line has opened the doors of one of its ships docked in the port of Palm Beach (north of Miami) to those in need of shelter and food because of the lack of electrical fluid in their homes.

The cruise will remain moored in this port until Saturday, with a cost per room and board of 39 dollars per person.

And 11 Miami-Dade County public schools today distribute water and 30,000 free hot food services to all those in need of food, the Superintendent of the Public School System, Alberto Carvalho, reported on his Twitter account.

“It is our moral obligation to respond to our community in these difficult times,” Carvalho said of assistance provided by the nonprofit Feeding South Florida Food Bank.

Also the city council of Miami Gardens today offers to those without light in its houses about 400 rations of hot food for free in the Episcopal Church Holy Family of this locality near Miami. It is required to present a document of the place of residence.

The Florida National Guard and several private organizations distribute free mineral water in Brevard, Seminole, Volusia and Polk counties (state center) from Thursday, in order to alleviate the needs of those affected.

In Brevard County, the Florida National Guard will deliver a free box of mineral water per vehicle in the cities of Cape Canaveral, Cocoa, Cocoa Beach and the Merrit Square shopping center on Merrit Island.

Texas HEB supermarkets continue to ship supplies to the Publix retail chain, which is well established in Florida, to supply the victims and in response to Publix’s help when Harvey hit this southern state.

Cyclone Harvey in southeast Texas left about sixty people dead and tens of thousands displaced after landfall on August 25 and causing historic flooding in the country’s fourth-largest city, Houston.

HEB trucks loaded with water, ice and cleaning supplies are delivered to the Publix headquarters located near the city of Tampa on the west coast.

On the other hand, Florida Senator Bill Nelson asked the state’s cable, telephone and internet companies to proceed to establish reductions, exemptions and cancellations of extra charges to their users, while still close to two million homes, offices or businesses they remain without light or air conditioning.

Nelson sent the request to the presidents of companies such as AT & T, Sprint, Verizon, Comcast, asking them to offer discounts to customers without electricity and to allow a 60-day moratorium on late payment charges.

Swedish furniture and home appliances chain Ikea is offering a special discount of 15%, the same as that enjoyed by its employees, to buy certain items in its stores in Miami, Tampa and Orlando as a way to help the victims of Irma.