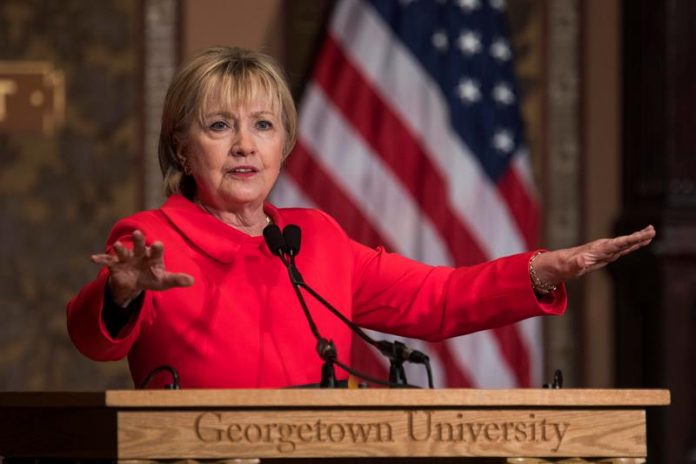 “He was quite successful in appealing to a nostalgia that could give hope, comfort, resolve complaints, to millions of people who were angry over what others had gained,” he said in an interview with CBS, the first since his painful and unexpected electoral defeat ten months ago.

After a long time of introspection, Clinton will begin a tour of 15 cities, starting with Washington, to present her new book, “What Happened,” which goes on sale this Tuesday.

Asked if those “millions of angry people” referred to whites, the former state secretary said yes, she spoke of “millions of white people.”

“I understood that there were many Americans who, because of the financial crisis, were angry, and there was resentment, I knew it, but I thought it was my responsibility to try to offer answers to that, not to stir it up,” he explained.

“I think it was a mistake because a lot of people did not want to hear my plans, they wanted me to share their anger, and I should have done a better job of showing them that I understand.”

In a very personal interview, Clinton confessed that his defeat still hurts and explained that witnessing Trump’s inauguration on January 20 at the Capitol was “an out-of-body experience.”

“And his speech, which was a cry from the white nationalist instinct,” he said.
Clinton, after months of reflection, has concluded that she did a traditional campaign while Trump’s was “a reality show.”

“We have a reality show that ends with the election of a president. He ends up in the Oval Office and says, ‘Boy, this is a lot harder than I thought’ (…) Well, yes, because it’s not a television program, is real, “added the former first lady.

One of the moments of the campaign that especially recalls is the debate in which Trump approached her while it was her speaking time in a way that aroused numerous comments.

“I had him grumbling and looking maliciously and moving towards me. It was so disconcerting,” he said.

“While I was answering questions, my mind wondered: Do I keep my composure? Do I act as a president? Or do I turn around and tell him, get out of my space, back off, disgusting?” He continued.

“I did not do the last thing, but I think that in this time in which we are, particularly in this campaign, maybe I missed some opportunities,” he added.

Nevertheless, admits that its greater error was to have used a private mail server when it was Secretary of State, a polemic that never managed to stop.

On his next projects, he said: “I have finished with being a candidate, but I have not finished with politics because I literally believe that the future of our country is at stake,” without specifying.