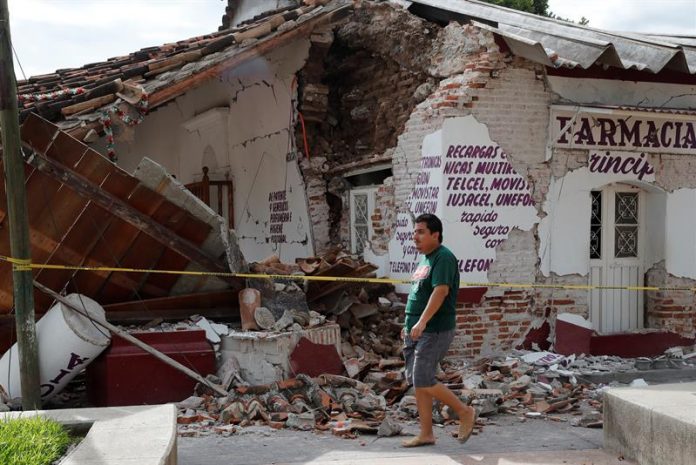 The number of people potentially affected by the earthquake of magnitude 8.2 of September 7 in Mexico amounts to around 2.3 million, while the death toll remains at 90, official sources said today.

The governor of Oaxaca, Alejandro Murat, confirmed in a press conference in the municipality of Ixtepec that the number of people died due to the quake in that southern state remains at 71.

“There are 41 municipalities that have been affected by this earthquake. We are talking about more than 800,000 citizens who were potentially affected,” he said.

Murat said that the municipalities with the most damage are Juchitán, Unión Hidalgo, Ixtalpetec and Astaca. “We are still evaluating the other municipalities that also had important impacts,” he said.

The governor also reported that there are 324 schools affected, 42 of them with total damages, reason why the suspension of classes will be kept tomorrow in the region of the Isthmus of Tehuantepec “to continue with the evaluations and to avoid risks”.

Meanwhile, the Secretary of Public Education of the Federal Government, Aurelio Nuño, told Milenio newspaper that there will also be no classes tomorrow in the southeastern state of Chiapas, where there is severe damage in 47 schools and minor damages in 900.

“We will be enabling alternate sites to avoid delays in the courses,” because “there are schools that have relatively minor damages that will be repaired more or less quickly and others that are, at least, will have to be completely rebuilt,” he said.

The government of Chiapas reported that the number of houses affected by the earthquake reached 40,000 and the number of deaths remains at 15.

He said that although there are reports from the 122 municipalities in the state, most of the damage is concentrated in 82 locations. Some of the municipalities with the largest number of damaged houses are Tonalá, Cintalapa, Parral, Venustiano Carranza, Acapetahua, Emiliano Zapata, Tuxtla Gutierrez, Tapachula, Suchiate, Pijijiapan and Comitán.

The number of victims in the state of maintains in 1 million 479,575 people, so the total is approximately 2.3 million.

Apart from the fatalities in Oaxaca and Chiapas, the state of Tabasco (southeast) also has four deaths from the earthquake, National Civil Defense Coordinator Luis Felipe Puente reported Saturday.