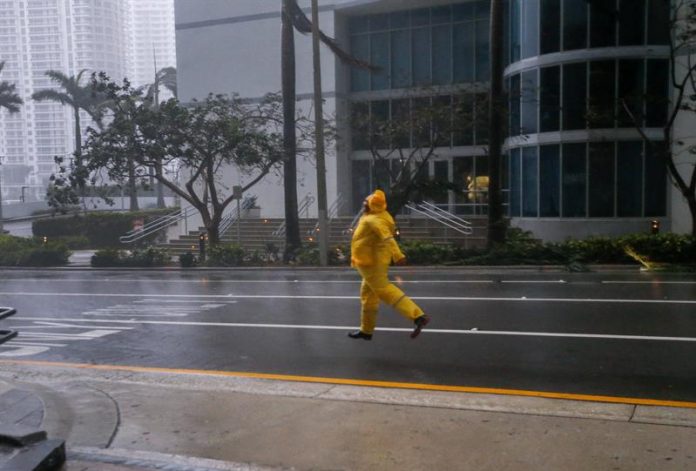 The intense rains and the powerful wind gusts of Hurricane Irma put Miami in a chaotic situation, with thousands of people without electricity, streets flooded by rainfall and rising sea levels and collapsing trees and a large construction crane .

The drains of numerous streets in Miami Beach, Brickell and Downtwon are unable to drain the rain that falls with intensity from Friday afternoon in a city that, in any case, breathes a little relieved to avoid being in the path of Irma, such as initially estimated by meteorologists.

However, the crash of this category 4 hurricane is such that, despite the nearly 200 kilometers that separate Miami from the eye of the cyclone, water reaches waist high in some areas of the country’s seventh most populous county , with more than 2.6 million inhabitants.

The other great danger is the rising sea level, which has entered some areas of the city, such as the residential Coconut Grove, and you can see some boats, traditionally anchored in the marinas, sailing aimlessly in the surrounding streets .

In the neighboring Coral Gables the protagonism is taken away by the trees, many of them centenarians, who have fallen under the force of the winds that drag Irma, that landed this past dawn in the Keys, in the extreme south of the state, like category 4 and winds of 130 miles (215 km / h), with even greater bursts.

And at least one of the twenty large cranes that are used to lift the large towers of apartments and offices in downtown Miami has fallen in the morning of this Sunday due to the strong wind, which in Miami has reached 90 miles per hour (145 kilometers per hour).

Local authorities have warned residents living in contiguous buildings to evacuate cranes to avoid the risk of any of them falling on their condominiums, although their request was not met by many, as Efe found.

The crane that fell is located in downtown Miami, next to the federal prison, with a capacity of 1,316 inmates and, according to local media, was not evacuated.

The city of Miami has asked residents not to approach the site, in the danger of new parts of the crane, which fell on the building under construction.

In addition, city dwellers, such as those in much of the state, are on the alert for dangerous tornadoes, which have already made their appearance in South Florida since Saturday afternoon.

Tornadoes are especially likely to be on the “dirty side” of the hurricane, ie southeast Florida, home to the state’s three most populous counties, Miami-Dade, Broward and Palm Beach.

The situation could be complicated when night falls, as thousands of Miami-Dade County users have run out of electricity.