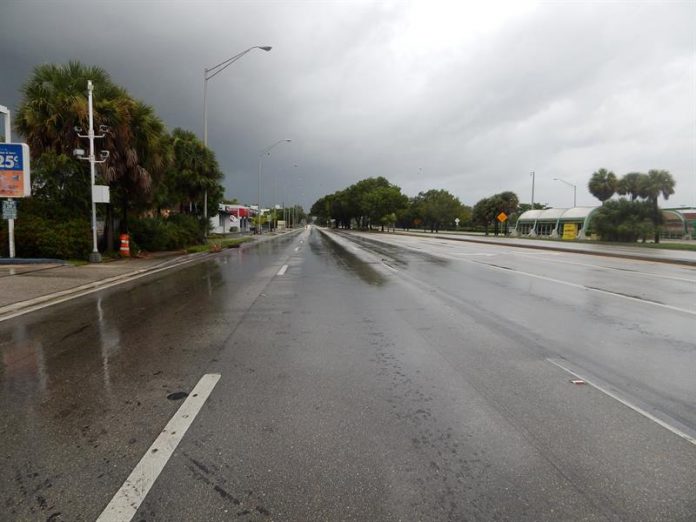 Hurricane Irma continued its unstoppable advance into the mainland of Florida, where its effects were felt several hours before its arrival in the form of floods, rising sea levels and powerful winds of 130 miles, with even greater bursts.

So far, at least three people have died in Florida as a result of adverse weather conditions caused by Irma, currently a Category 4 hurricane that has left more than 1.5 million homes out of electricity.
Before arriving in Florida and with category 5, the cyclone caused about 30 deaths and substantial material damage as it passed through the Caribbean.

Having spent Saturday on Cuba and landed today in the Florida Keys, Irma was advancing northward with a speed of translation of 9 miles per hour and was 80 miles to the south of Naples and 115 miles to the south-east of Ft. Myers, on the southwest coast of the state, according to the US National Hurricane Center (CNH).

At 11:00 local time (Eastern time) that institution reported that Irma’s eye was to “move soon on the lower Keys to move later, this afternoon and evening, near or on the west coast of the Floridian peninsula.”

Irma’s eye is expected to travel across northern state and southwest Georgia on Monday afternoon, according to the CNH.

The situation in southern Florida has worsened substantially in the last few hours, as seen in the television footage taken by reporters who have ignored orders from state officials not to stay out in the open.

The three attributed so far to Irma have occurred in traffic accidents caused by bad weather, according to authorities.

Miami, Tampa and Naples, like the rest of the cities in the southernmost part of the “sunny state”, now seemed cities abandoned by their inhabitants at the mercy of the force of nature.

Schools, shops, public and private offices, banks, private houses and ports and airports were totally closed as in recent days.

In Coral Gables, a residential city bordering Miami, people and vehicles were shining because of their absence, according to Efe.

Many streets of this zone of exuberant vegetation were blocked by branches and fallen trees.

Brickell Avenue, the heart of Miami’s financial district, was transformed into a river up to 60 centimeters (2 feet) high in some areas, and Coconut Grove rose sea level and several of the yachts and others recreational boats anchored in their marinas ended up on the sidewalks.

In addition, a crane fell on a building under construction in downtown Miami due to strong hurricane Irma winds, without anyone being injured, which was witnessed by one of the employees of the National Weather Service, who recorded the time of the fall.

The few people who have not obeyed the evacuation orders issued by the state’s government, which cover 6.3 million people, are locked in their houses waiting for Irma’s clash.

Tens of thousands of people were sheltered in schools, sports centers and other facilities, and an even larger number fled north after a week of increasingly alarmist messages about the danger they were in if they stayed.

Irma’s entry into the mainland of Florida brought immediate power outages in the south of the state.

Some 1.5 million households are without electricity, which is equivalent to 15% of total electricity utility customers, according to the Florida Office of Disaster Management.

However, the Florida Power & Light Company (FPL), one of the leading providers, has estimated at nearly 2 million homes that have lost electricity because of Hurricane Irma.

Company spokesman Rob Gould said today at a press conference that 320,000 of those customers have already recovered service but warned that “the road is going to be long” and that Irma’s effects will be felt throughout the state .

Duke Energy Florida projects that more than one million of its 1.8 million customers will be cut off due to the approaching hurricane.

Although its “weakening” is predicted, Irma will remain a “powerful hurricane while moving near or on the west coast of Florida,” with storm surge, tornadoes and floods, warned the CNH.