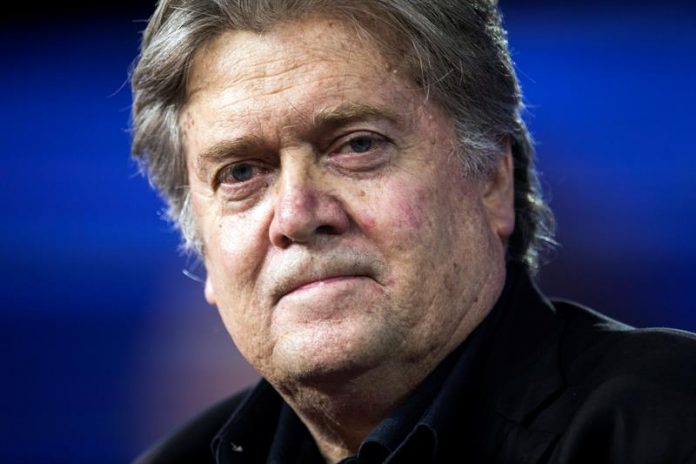 Donald Trump risked stepping clear of the populist base that made him president by firing his main speaker at the White House: controversial chief strategist Steve Bannon.

“White House Chief of Staff John Kelly and Steve Bannon have mutually decided that today would be Steve’s last day. We are grateful for their service and we wish them well,” said White House spokeswoman Sarah Sanders, in a brief statement.

After days of rumors about his possible departure, Trump advised his advisers early on that he had decided to fire Bannon, according to official sources told The New York Times.

The adviser, however, defends that the decision to leave is his, that already on August 7 submitted his resignation to be effective on the 14th, but that he agreed to delay his departure because of the political storm unleashed after the violence in a march Supremacist in Charlottesville (Virginia) on Saturday.

“The Presidency we fight for, and win, is over,” Bannon said in an interview with the conservative magazine The Weekly Standard.

“We continue to have a huge movement and we will do something about this Presidency of Trump, but that Presidency (for which they fought) is over, it will be something else,” he added, after assuring that his desire was to return to his job as executive chairman of the publication Breitbart News.

He rejoined that post today, he warned: “Now I am free.I have my hands back in my guns.Someone said ‘it is Bannon the Barbarian’.I will undoubtedly crush the opposition. There is no doubt. I built a fucking machine in Breitbart. And now I’m back, knowing what I know, we’re going to accelerate that machine. ”

Trump’s initial plan, according to CNN sources, was to fire Bannon and the then chief of staff, Reince Priebus, with whom the adviser lined up, at the same time, Pressure from Mark Meadows, president of the Freedom Caucus, the ultraconservative faction of the party.

But Meadows quit advocating to keep Bannon in the White House after the astonishing advisor interview in The American Prospect on Wednesday that contradicts Trump’s policy on North Korea.

Bannon, who stayed in Washington in the first weeks of August in which the president and his team are “on holiday at work” at his golf club in Bedminster, New Jersey, ).

Bannon was in open war for months with Jared Kushner, son-in-law and favorite adviser to the president; With chief economic adviser Gary Cohn and other voices considered “moderate” he dismissed as “globalists.”

But the confrontation that most exhausted the patience of the new chief of staff, General John Kelly, was that of Bannon with the national security adviser, H.R. McMaster, with whom he had loud arguments over his direct refusal to increase his military presence in Afghanistan and allegedly supplied negative information to the press.

Bannon is accused of not playing as a team and promoting his own agenda: the list of isolationist, protectionist and anti-immigrant promises that brought Trump to the White House and which the advisor reviewed daily on his famous white board.

With his departure, Trump risks moving away from a base for which Bannon was the guarantor that he would fulfill his promise in the campaign: to build the wall on the border with Mexico, to curb irregular immigration, to implement protectionist measures and to proceed with a withdrawal of United States on the world stage.

But its linkage with the far right meant keeping it at the White House also having a high political cost at a time of strong criticism for Trump’s lukewarmness and ambiguity toward white supremacist groups in their statements about violence in Charlottesville.

“The decision to break with Bannon can be understood as an effort to save his presidency after Charlottesville, but perhaps it will be the beginning of the end of his administration,” said Joel Pollak, editor-in-chief of Breitbart today.

“Trump’s voters have been patient, but perhaps they will soon know if Donald Trump is actually Arnold Schwarzenegger 2.0,” he added, recalling that the California Republican actor and ex-governor (2003-2011) “abandoned” his base to circumvent criticism of Their management.

This message and its “# war” tweet after the Bannon exit warn Trump that he has taken a risky step and that his base will not remain on his side if he does not comply.