The Frenchman Yohann Diniz, world record holder of 50 km march, at last, at 39, got his first world title with a solo walk that gave him the victory with a time of 3h33: 12, record of the championships and the winning margin More extensive in the history of the championships: eight minutes.

Diniz, who doubled all his opponents but three, had Japanese escort on the podium. Hirooki Arai got the silver medal with a time of 3h41: 17 and his teammate Kai Kobayashi arrived two seconds later.

The previous championship record belonged to the Polish Robert Korzeniowski, who won in Paris 2003 with 3h36: 03.

With the French flag rolled around his neck and then unfolded over his head, Diniz was able to celebrate his victory throughout the final lap of the two-kilometer circuit.

The march introduced several novelties in London: for the first time they disputed all the tests the same day, the women were released in 50 kilometers and for the first time in 24 years was not in the exit of 50 the Spanish Jesus Angel Garci’a Bragado, absolute record holder Of participations in World Championships, with eleven.

After a week of shifting weather, often cool, on Sunday it dawned sunny in London, with 14 degrees at the start, at 7.45, and a humidity of 71 percent on the marked circuit at The Mall, with Buckingham Palace as Background curtain.

The Olympic and world champion, the Slovakian Matej Toth, suspended for doping, and runner-up Jared Tallent of Australia, were injured.

The oldest athlete present in these World, the Spaniard Alejandro Flórez, 46 and double Spanish and Swiss nationality, although competing for the latter, “suckled camera” at the beginning with Horacio Nava but ended up disqualified.

Operated from the heart in 2005 and runner-up of the World Cup in 2010, Nava, who prepared this World Cup in the Sierra Madre of Chihuahua, was planning to lower its mark (3h42: 51) and to that effect in the fifth km went with the everlasting Yohan Diniz, three times champion of Europe and world record holder (3h32: 33).

But Diniz – flat in Osaka 2007 – does not usually admit company in their rides. In the sixth, he left Horacio behind and went through the tenth in 44:28, with the Mexican to 41 seconds, Ecuadorian Andrés Chocho to 56, Colombian Luis Fernando López – in his farewell to 57 and Jose Ignacio Diaz first Spaniard 1:50.

The women’s race became from the first km in a dogfight between the Portuguese Inés Henriques, favorite, holds the world record (4h08: 26) and the Chinese Hang Yin.

American Erin Talcott, whose threat of lawsuit against the IAAF led to the abrupt inclusion of women in this test only twelve days before the championships, was disqualified when she had only gone 8 km.

Diniz, who had already doubled all the women, continued in the lead, at a rate of 4:18 km, passing through the equator in 1h48: 24. Three minutes behind a group of seven the Finnish Aleksi Ojala, with the Ecuadorians Chocho and Claudio Villanueva and the Chinese Wei Yu. Nava had fallen behind.

Between the women, Henriques and Yin maintained the joint step: 2:02:18 at km 25. The next, the American Kathleen Burnett, was more than six minutes.

Chocho, Ecuadorian flag bearer at the Games in Rio, was disqualified at km 36, but Villanueva, South American champion, who returned to compete with Ecuador after having done two years with Spain, still in the chase quintet Diniz.

At km 37 Arai – Olympic bronze in Rio – and Kobayashi, in perfect harmony, they jumped from the first group to take the other two places on the podium. Diniz was farther and farther away. He passed the km 40 with 2:51:32 and was able to enjoy a comfortable final. 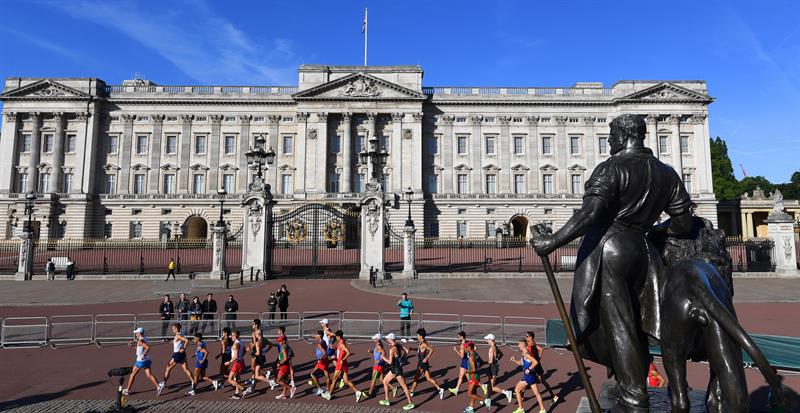