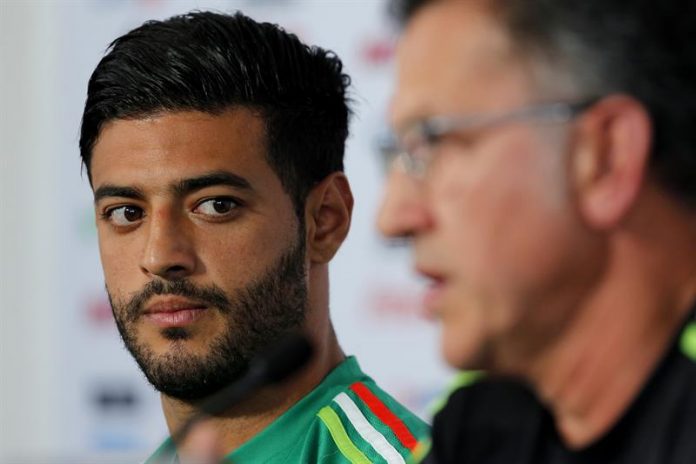 The Mexican international, Carlos Vela, the last of the players of the neighboring countries that has been “captivated” by the Professional League of Soccer of the United States (MLS), was categorical in his presentation like first appointed player of the new franchise Los Angeles FC , Saying that his goal is none other than to be “the greatest” of all.

Nothing new, since his teammates brothers Giovani and Jonathan dos Santos, who are already with the rival team and neighbor of the Galaxy of Los Angeles, also came with the same promise and goal.

But Giovani, who has been in the league since the 2015 season, has so far been unable to get anything he promised when he joined the Angels team, which has also had his brother Jonathan for 15 days.

Both hope to bring new life to the Galaxy in the antepenultimate place of the Western Conference standings with a dismissed coach, Curt Onalfo, and the arrival of veteran Sigi Smchid, who in turn was also beaten by Seattle Sounders FC In last summer.

Vela will be the star player of the new Los Angeles FC franchise, which will start competing next season under the direction of coach Bob Bradley, the United States ex-coach who has had no luck in his experience in Egyptian, Norwegian, French football And English, when dismissed from all of them.

Bradley returns to the MLS, in which he already directed before reaching the selection, by the back door and with less category that the one left when it was dismissed of the position of national selector.

The incorporation of Jonathan and Vela to the MLS is given when his soccer level has lost value in the best leagues of European like are Spanish, English, German, Italian, French and even Portuguese.

Although Vela on his arrival in Los Angeles assured that he could play in any of the best teams in Europe, the reality is very different, in fact he has always gone from more to less.

Vela, who will be in Real Sociedad until January, a team that will leave after completing a trajectory full of ups and downs, but as the second top scorer in the history of the club, at age 28 chose the option of competing in a minor league and the That arrives thinking that with its name it will win everything.

Although MLS football is still far below the League of Mexico and light years away from the European Championships, Vela presented with his new team with promises that could leave him mortgaged his future as a professional in the United States.

Assertions like “we’re going to get titles, I’ll look to be the best player in MLS history, and we’ll achieve incredible things” will be present from the first day he jump into the field and put on his own team uniform.

The last few examples have been English legends like David Beckham, Frank Lampard and Steven Gerrard, among others.

Beckham had to wait three years before joining the team, where he received criticism from his former teammate Landon Donovan due to the lack of dedication and sacrifice that he put in each game facing the collective game.

Only when Beckham worked as a team and with Donovan a great leader did the Galaxy achieve the MLS title in the last two seasons that completed the English player of the multimillion-dollar contract for five years, from 2007 to 2012.

Precisely since Donovan left the Galaxy, the Angolan team has not been able to get the league title, despite having since 2015 his compatriot Giovani dos Santos, who also came from Spanish football, Villarreal, with the promise that was going To “get titles”.

Vela must know the history of how the world of professional sports in the United States works, as regards the process of rebuilding the new franchises in which despite having players of the Spanish class David Villa with New York City, and The Brazilian Kaka (Orlando City), have not been able to play an MLS final in the previous three seasons of competition.

This season the examples are the two new franchises of Atlanta United and Minnesota United that have begun their journey in the MLS without that they have emphasized, nor are among the teams that can fight for the title.

Vela, who can already express himself perfectly in English, acknowledged that the idea of ​​reaching the MLS was something that had already in mind for some time and is convinced that he had chosen the best career option for his future sports. The results will be those that from 2018 have the last word.