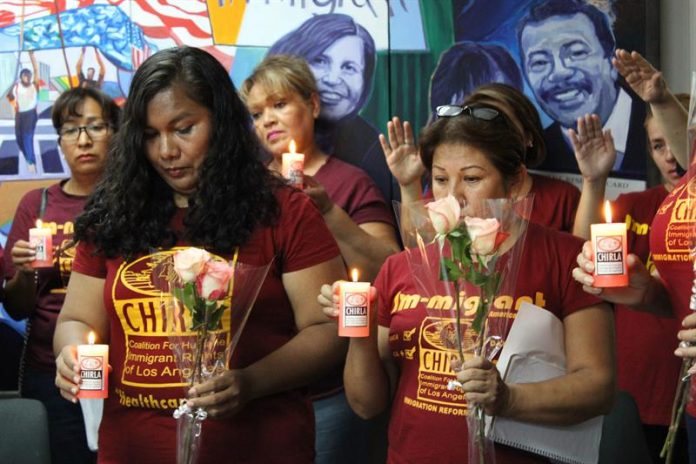 Thousands of immigrants will participate Sunday at a Mass celebrated by the archbishopric of Los Angeles to recognize the immigrant contribution to the country, and with the participation of a group that makes a pilgrimage almost 50 miles from Orange County.

A dozen pilgrims began Friday from the parish of Santiago de Compostela, in Lake Forest, a walk that will culminate in Los Angeles to ask for undocumented immigrants and their families “affected by an immigration system that does not work.”

“It’s not a march, it’s not a protest,” Tom Haas, coordinator of the pilgrimage, told a news conference, and said that the intention of walkers is “to pray quietly” in favor of a “reasonable immigration reform in the country “.

The pilgrimage has taken the example of Antonio Méndez, a 56-year-old member of the parish of Santiago de Compostela and who, during the two previous years, made the march “on foot and praying”.

After last year he was accompanied by four other people on his pilgrimage, for this year Gomez asked for parish support to expand the group of walkers.

The pilgrims hope to spend the night in the parish of San Marcelino, in Commerce, to arrive Sunday at the Cathedral of Our Lady of Los Angeles and participate in a procession scheduled for the early afternoon.

At 3:30 pm local time, Archbishop José Gómez will celebrate the Mass that is expected to attend more than 4,000 people.