Mexico moves ahead with obstacles to new paternities

Mexico, which celebrates father’s day tomorrow, is increasingly open to new paternity roles, but machismo, the wage gap and lack of policies hinder its development, Efe told the co-author of the State of the Paternity in Latin America and the Caribbean 2017, Francisco Aguayo.

Aguayo, co-author of the report by Promundo, IPPF, Cultura Salud / EME, MenEngage América Latina and Mexfam, said that men are increasingly discussing their role in child rearing, but in practice they participate much less in household tasks And the care of the children.

“Latin America is far from achieving co-responsibility in terms of upbringing,” said Aguayo, who remarked that in Mexico women carry out the tasks of care and household 2.8 times more than men.

The father’s participation in activities that promote learning and preparation for school in four or more activities was only 14% compared to 62% of mothers, according to the national survey of boys, girls and women in 2016.

“In Latin America, half of all women in families stay at home to take care of their homes and children, and only 3% of men have left work to care for someone At home, “Aguayo said.

Unicef ​​representative in Mexico, Christian Skoog, told Efe that it is necessary to “balance the responsibilities and break the gender and cultural traditions,” since encouraging these stereotypes prevents these societies from acquiring the “balance they need to grow culturally, socially, economically”.

According to a study by the Institute of Social Research, 0.6% of families are spouses of the same sex, of which 3 quarters are made up of male partners.

Aguayo stressed that 10% of the families are in charge of a father, as is the case of Salvador Sánchez, born in the northern state of Durango in 1984 and living in Mexico City with his daughter Paloma aged 14 since His wife disregarded her when the girl was three years old.

“She did not like to go to school on May 10. She took her for walks because she did not like being at home, she was isolated,” said Sánchez, who said that when his wife abandoned them, he would not let himself be overcome by the penalty. Who worked very hard to keep her daughter. 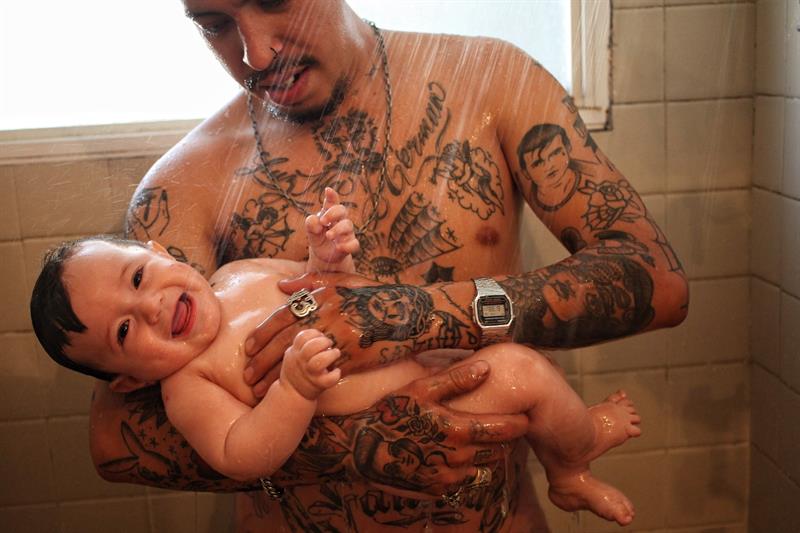 Paloma, Salvador explained, is now in a more rebellious phase and is going through “hormonal changes,” but has the support of his mother and sister to resolve those obstacles that he has difficulty only facing.

Salvador, who works as an auto mechanic and collaborates in his uncle’s workshop to earn extra resources to support his family, said he has done “everything possible to set a good example for the girl.”

Another single father is Joel Cruz, who has a six-year-old son, Yael, who got through a woman who was pregnant and, as he did not want the baby, would give him away, to which Cruz reacted and told the Woman that he wanted to stay.

“Since I was 20 years old I wanted to be a father but I never married or had a family with a woman because of my sexual preferences,” Cruz explained to Efe, who was throughout the pregnancy process and that, once the child was born, she Granted him all rights.

Joel, who works in a bank, gets up early, prepares Yael’s food, takes him to the school where one of his cousins ​​is a teacher, who then returns him to his house, where his grandmother takes care of him until he Father arrives from work

He explained that neither he nor his son has suffered discrimination and that although he no longer has contact with the birth mother, he said that in case Yael has doubts later he will respond without any problem.

The academic of the Department of Psychology of the Ibero Angélica Ojeda revealed to Efe that homosexual couples also decide to organize themselves under predetermined roles. One example would exemplify this phenomenon are Pablo Zuñiga and her husband Sergio, who got their daughter Ana, who is already six months old.

Juan revealed to Efe that Sergio quit his job and that he now dedicates himself “100%” to taking care of his daughter, while he brings the money home and at night and at weekends takes care of it.

The couple, who lives in Puebla, wanted Ana to have genes from both, so they hired two surrogate mothers and inseminated four embryos, of which only one was fertilized, which they preferred not to know what genes they have since they want to feel that the Son is both.

He explained that they have not suffered any discrimination to be homosexual parents, but stressed that he is worried when they have to write Ana in school, but recalled that “the important thing is the support of the family.”

Having diabetes and not having a medical control usually presents consequences after having the disease for a period of about 10 years, said today...

Bernie Sanders will compete again in the Democratic presidential primary

The independent senator for the state of Vermont, Bernie Sanders, announced on Tuesday that he will attend for the second time the primary Democratic...

Depression, disabling condition that affects 300 million in the world

When Ana Martinez decided to end a relationship with her partner after eight years, she never imagined that this step in her life was...

Libyan government says it has regained full control of Tripoli

Forces loyal to the internationally recognized Libyan government have announced on Thursday that they have regained control of the entire capital, Tripoli, in a...

Trump says the US has a “good strategy” for Venezuela

The president of the United States, Donald Trump, has assured that his Government has a "good strategy" for Venezuela, underlining that the Government of...