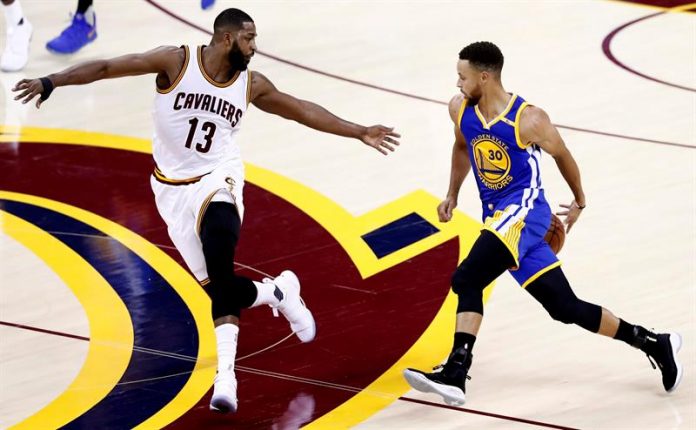 Eredivine figures Kevin Durant and Stephen Curry returned to shine in a special way in the third game of the NBA Finals to destroy with their offensive game to the defense of the Cleveland Cavaliers who lost of premises 113-118 before the Warriors Of Golden State.

Durant, with 31 points, including a decisive triple with 45 seconds left by the end of regulation time, left him the attack leader and also as the key player who kept the Warriors unbeaten in the playoffs (15-0) and with the Advantage of 3-0 in the series before the Cavaliers, current champions of league.

Durant’s last triple of the four he scored, spectacular in his run after running halfway down the lane and then standing behind the perimeter for the throw, said it was something he has always trailed throughout his life.

That basket changed the history of the game by giving the Warriors the partial advantage of 113-114, which they never lost by mentally sinking players of the Cavaliers who could not react by training in panic and not know how to run on possessions Of ball.

The Warriors sentenced with four points obtained from the line of personnel.

Durant’s action made it possible for the Warriors to overcome the six-point deficit with just three minutes to go and the Warriors starter put them back on the way to victory by finishing the fourth quarter with 14 points.

Curry had previously been the undisputed leader in the game’s lead and had double-doubleed 26 points, including five three-pointers in nine innings, grabbed 13 rebounds, six assists, recovered two balls and lost only one, out of 18 To commit the Warriors, compared to the 12 of the Cavaliers.

“It was the most important win and we needed to keep the winning track,” Curry said. “For us the third match was decisive and more after everything that happened last year.”

The great work of Durant and Curry was perfect complement to escort Klay Thompson who has completely recovered his best wrist touch and the 30 points he contributed, including six triples of 11 attempts, was also decisive.

While power forward Draymond Green returned to great teamwork with a presence in every facet of the game with eight points, eight rebounds, seven assists, recovered a ball and put a cap.

Respectively of the Cavaliers, who again lost the duel under the hoops and inside the painting when capturing 37 rebounds for 44 of Golden State.

The Warriors now have a perfect 15-0 record so far in the playoff competition, which they had never before achieved in the history of professional sports in the United States.

Once again, the Warriors are also a triumph of securing the championship title, as they did last year when they had a 3-1 lead and were eventually snatched away by the Cavaliers.

Now they are 3-0 and nobody in the history of the NBA Finals has been able to overcome that disadvantage to get the title.

Leading forward LeBron James and base Kyrie Irving fought until they failed in the decisive moments of the fourth period, but they always had the Cavaliers in the game.

James was the Cavaliers ‘leading scorer by scoring 39 points and responding to each of the Warriors’ baskets, as well as taking 11 rebounds, scoring nine assists, but had five turnovers.

While Irving emerged with his best scorer inspiration in the third period and also put the Cavaliers in the trap with 38 points, six rebounds, but only three assists.

Although J.R.Smith escort improved in his offensive work with 16 points, including five triples, power forward Kevin Love this time was not a winning factor when scoring nine points, much less the pivot Tristan Thompson who left if so many.

Although Love contributed 13 rebounds he never could have control in the game inside the painting and under the hoops.

The Cavaliers had everything to their advantage in the absence of 3:09 minutes for the final with the advantage of 113-107 partial after a triple of Smith, but then were unable to score again before the good defense of the Warriors, who They were also going to have the best Durant score, which was once again the great star.
Data sheet: