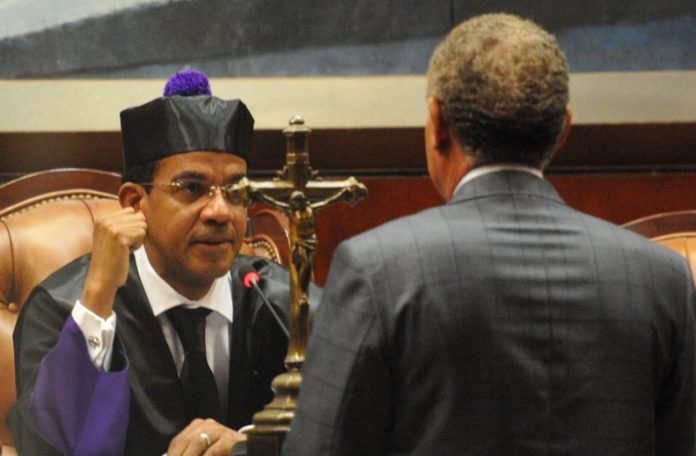 A judge Tuesday issued a preventive detention against the Dominican Minister of Industry and Commerce and seven other politicians and businessmen for the bribes that the construction company Odebrecht claimed to have paid in the country between 2001 and 2014 to obtain public works contracts.

Judge Francisco Ortega imposed six months of preventive detention for Minister Temístocles Montás, equal penalty for the president of the Modern Revolutionary Party (PRM) and ex-president of the Senate, Andrés Bautista, and a year for businessman Ángel Rondón, Accused of being the person who distributed the bribes.

On May 29, a few hours after being arrested along with nine other politicians and businessmen, Montás placed his position at the disposal of the Dominican president, Danilo Medina, who has not yet pronounced on the case.

Ortega gave 9 months in prison for lawyer Conrado Pittaluga, and 3 months for the former executive vice president of the Dominican Corporation of State Electric Companies (Cdeee) César Sánchez and for the former official of that dependency Máximo De Óleo.

Meanwhile, he ordered house arrest for the former Cdeee Radhamés Segura, a member of the influential political committee of the LDP, and the ex-director and former director of the National Institute of Drinking Water and Sewerage (Inapa) Roberto Rodríguez.

Among the 14 implicated in this case are two senators of the ruling Dominican Liberation Party (PLD), Julio César Valentín and Tommy Galán, and a PRM deputy, Alfredo Pacheco, who have parliamentary immunity.

For the lawmakers, whose respective chambers have already begun the process to decide whether to withdraw immunity, Ortega decided a measure of coercion consisting of preventing the departure of the country and a bond of 5 million pesos (93,400 euros).

Another of the accused is Bernardo Castellanos, who is out of the country and has reported that he will return to face the allegations, although this has not occurred until this moment.

The accused have a period of 20 days to appeal the ruling, according to the sentence read at the end of the hearing, which had been postponed on several occasions.

The judge also accepted the request of the Public Prosecutor’s Office for the case to be declared complex, an action that, said last week, Attorney General Jean Alaín Rodríguez, “will allow greater means of proof and reasonable time to investigate further “.

At the same time, it gave him a period of 8 months to expand the investigations.

The group, which has denied during the hearings any connection with the case, is accused of crimes of bribery, association of wrongdoers, prevarication, embezzlement, illegal enrichment and money laundering.

The Brazilian construction company admitted to having paid $ 92 million in bribes in the Dominican Republic between 2001 and 2014, a period that includes the Governments of Hipólito Mejía (2000-2004) and the opposition Partido Revolucionario Moderno (PRM), as well as those of Leonel Fernández (2004-2008 and 2008-2012) and the current president, Danilo Medina, both of the PLD.

The arrests were made shortly after the Dominican Republic received from Brazil data on bribes paid by Odebrecht in the country, thanks to an agreement between the Attorney General and the multinational, which will pay $ 184 million, double what Delivered in bribes to get public works contracts between 2001 and 2014. EFE